We lived in Christchurch for a couple of years and often on summer weekends we’d drive to Governors Bay and veer right to Governors Bay Hotel for a beer in the garden. On this sunny spring day we veered left to She Universe Cafe & Chocolaterie. There are a few unusual aspects to She Universe, one is the splendid view it shares with the hotel, another is the spiritual element of their chocolate enterprise. 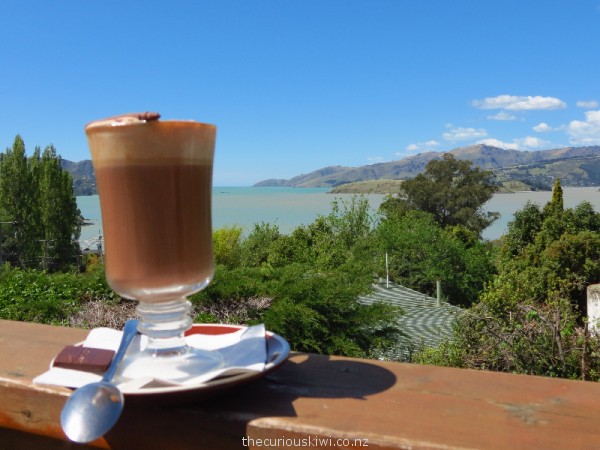 Hot chocolate with a view at She Universe

She stands for Spiritual Human Evolution. The staff at She Universe practice a moving meditation called ‘The Form’ that was developed by Bernie Prior, one of She’s co-founders. From what I can gather the positive benefits of the meditation can be passed on through the sharing (or selling) of chocolate to consumers. If that description doesn’t make much sense, and you’re interested, sceptical or both, see the video under ‘Unexpected Discoveries’. 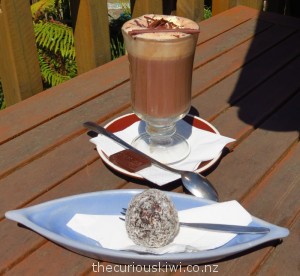 An unexpected discovery for us were the divine cacao balls – pureed dates, orange oil, hazelnuts and cacao nibs ($5.50). Along with lots of chocolate choices, there is a breakfast and lunch menu and many dishes include chocolate in some form. We were there for a chocolate filled afternoon tea and as well as the cacao balls had ‘decadent Belgian hot chocolate’ ($10.50) and ‘She’s infamous brownie’ ($15.50). 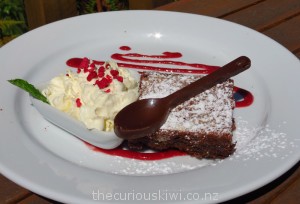 We thought the hot chocolates and brownie were expensive and while they didn’t get a WOW from us we will return for the setting, the view, and to try more of the treats at the Chocolate Counter. 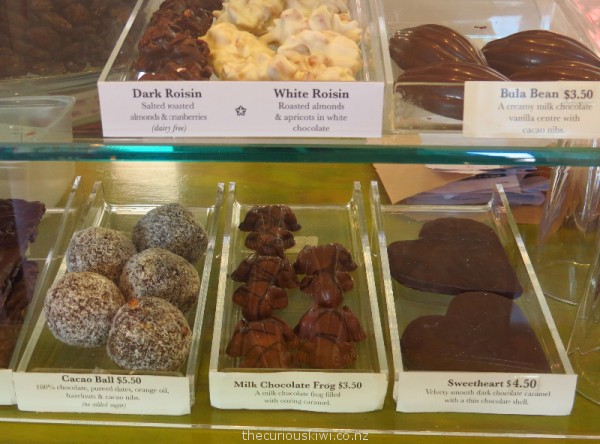 Chocolate treats at the Chocolate Counter

The Chocolate Counter also has ‘source to bar’ chocolate made with cacao from Samoa. This video shows the source to bar process, it begins in Samoa with the grower sampling the chocolate made from his cacao, demonstrates the extraction of beans from the pods, and ends in the She chocolate kitchen. 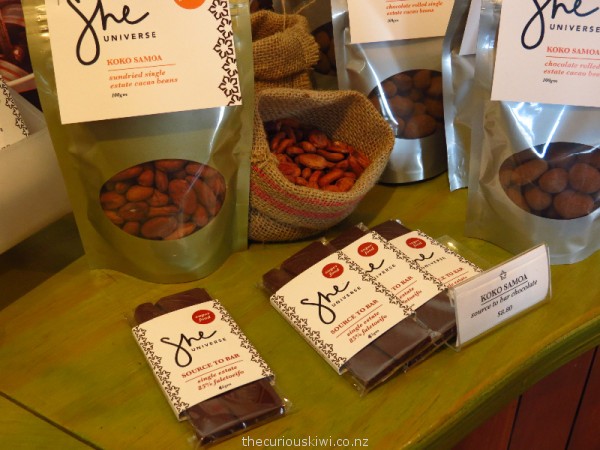 Source to bar chocolate from Samoa

She Universe also have a Chocolate Bar at The Tannery, 3 Garlands Road in Woolston if you don’t have the time for the 20 minute or so drive from the city to Governors Bay. I’ll end with a quote I read near the till that made me laugh and shows they have a sense of humour along with their spirituality – ‘If you fear change …… leave it here’, (but take some cacao balls home with you).