It feels like the Christchurch inner city rebuild is starting to take shape. The Re:START container shopping centre now feels like the temporary shopping solution it was always meant to be and construction is going on all around its edges. The new bus interchange is fully operational and its facilities for cyclists (more below) help lay the foundations for a very bike friendly city, the city’s flat terrain is a bonus as well. 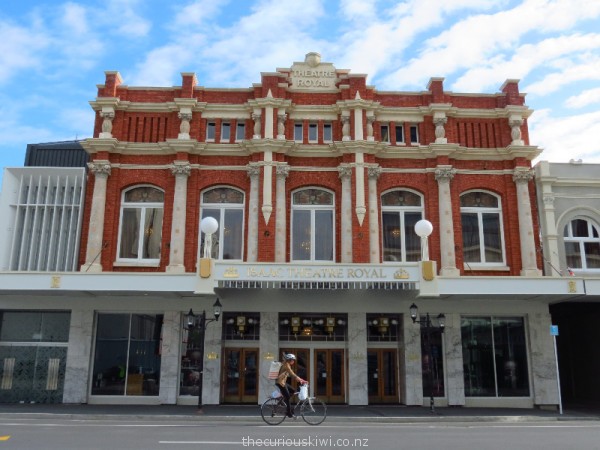 The restored Isaac Theatre Royal has been open nearly a year and takes pride of place on Gloucester Street, the calendar is stacked with events for November. The Stranges Lane dining precinct on Lichfield Street opened in August 2014 and was doing a steady trade when we walked through looking for dinner.

Nearby, the new Dux Central may be a beacon amongst empty sections at the moment but one building is on its way up next door and we’ll be interested to see the area again next year. Below are some new and curious additions to the city rebuilding ……. 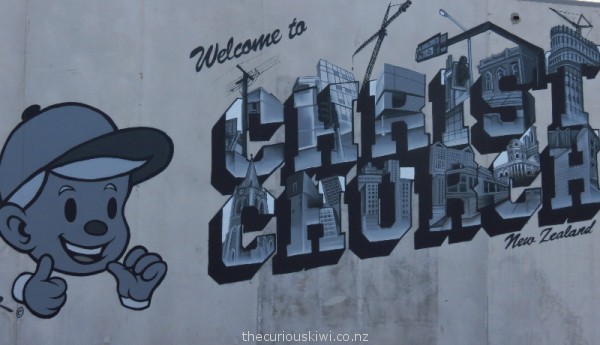 Welcome to Christchurch by Dcypher

Dux Central, Poplar Lane
Dux Central craft beer bar and grill opened just over a month ago, it’s the third Dux to join the stable which includes Dux Dine and Dux Live (closed Jan 2016). On opening night the interactive urinals attracted TV coverage, we couldn’t get passed the graphic images on the toilet doors but if you’re curious you can see both via TVNZ. 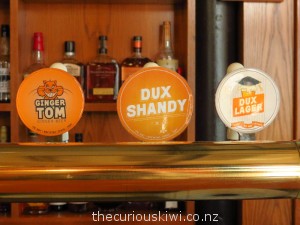 It was the Dux Shandy on tap that caught my attention and my dollars. New drink drive limits may have increased the market for mid strength drinks and the shandy at 3% alcohol is also an option for those who’ve found craft beer a bit too hoppy. As well as a craft beer bar, Dux Central has an adjoining wine and spirit bar, a classy space where I’ll be looking for the reinvention of Miami Wine Cooler next time round. 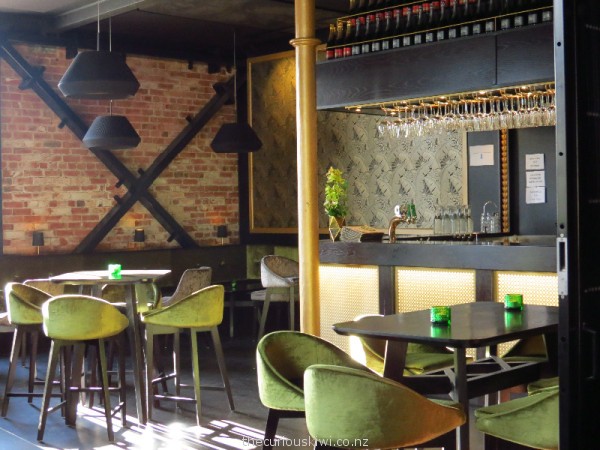 SCAPE Christchurch Biennial & Sculpture on the Peninsula
Contemporary art is on display around the city as part of the 8th SCAPE Christchurch Biennial until 15 November. Striking figure sculptures by Methven based sculptor Hannah Kidd attract plenty of attention at Re:START. The sculptures are based on every day heroes who have continued their daily routines and helped others following the Canterbury earthquakes.

Hannah Kidd will also take part in Sculpture on the Peninsula from 6 – 8 November. 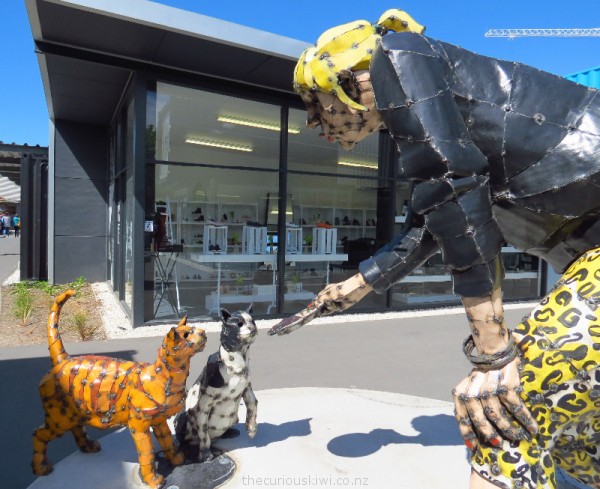 Christchurch Bus Interchange, corner Lichfield and Colombo Streets & Spark Bikes
Christchurch’s new bus interchange includes some nifty features like under cover and stackable parking for bikes. There are also charge points for electric bikes. Many buses now have bike racks for those who want to cycle/bus about. The under cover bike parking is open to all and it’s free. 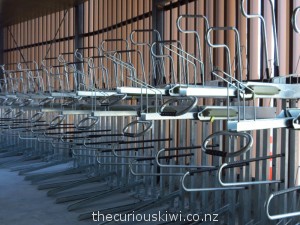 Under cover and stackable bike racks at Christchurch Bus Interchange

A crowd funding campaign started by Robert Henderson helped get a bike share pilot up and running. If you’ve used Next Bike in Auckland or Cambridge you’re good to go, if not you need to sign up. The first 30 minutes are free thanks to Spark, it’s $4 per hour thereafter or $20 for 24 hours. Cycling in Christchurch is a terrific website full of information on where to ride, bike events, hire options etc. 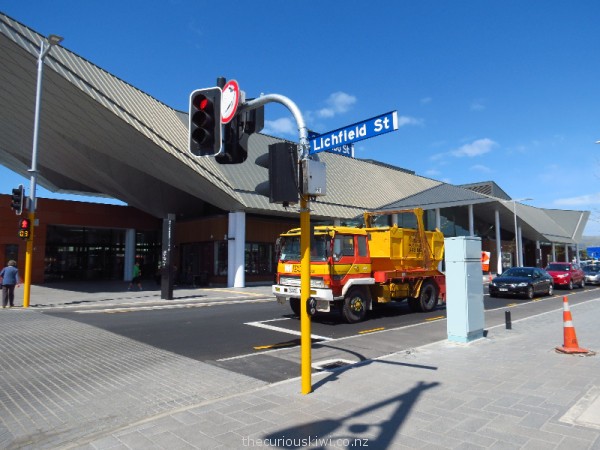 Sound Garden & Arts Central, Peterborough Street
Sound Garden relocated to Peterborough Street earlier this year thanks to Greening the Rubble and Gap Filler.  The garden is opposite the central library and there is a container cafe onsite. The instruments are made from all sorts of used materials like old fire extinguishers and big concrete pipes, the pipes are ideal drums for kids, and the large swinging rain stick sounds quite beautiful. 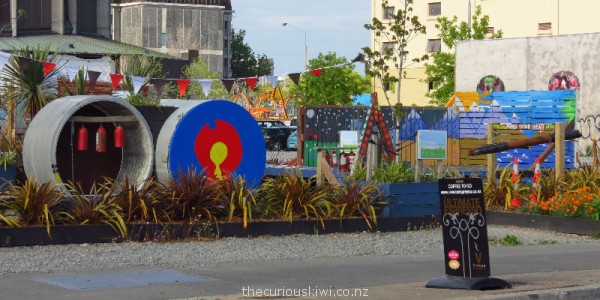 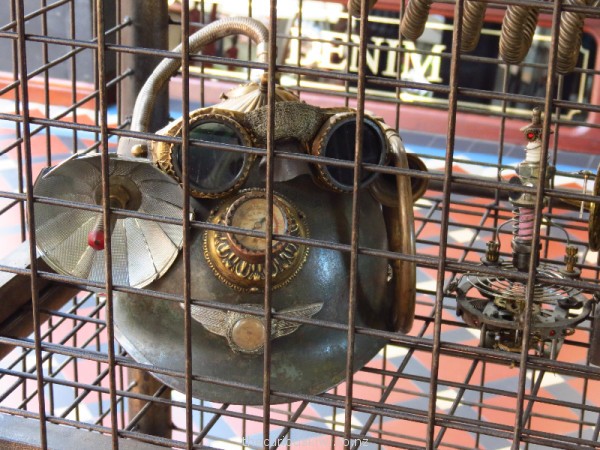 Part of the Canterbury Steamworks display at The Tannery

Street Art & Spectrum Street Art Festival 12 December 2015 – 17 April 2016
Street artists from New Zealand and overseas have painted large scale art works on walls in Christchurch’s inner city that provide bright spots in an area dotted with demolition and construction sites. From 12 December 2015 until 17 April 2016 the second Spectrum Street Art Festival will be held in association with the YMCA, and another 10 city walls will get a makeover. 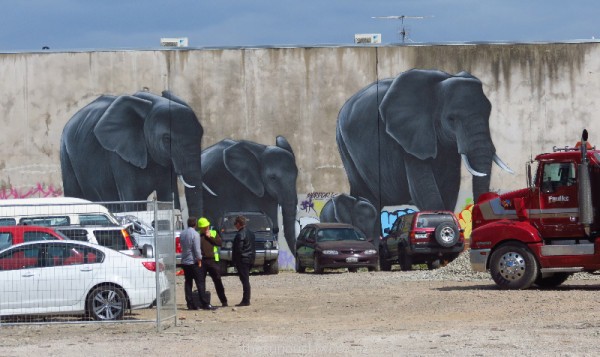 Elephants by OD (Owen Dippie) on a Manchester Street wall

The YMCA plan to create the world’s first Street Art Museum inside their stadium on Hereford Street. They are looking for donations and corporate sponsorship to reach their target of $8 million. So far $3 million has been raised, donations will be acknowledged in a variety of ways and the planned start date for the build is April 2016. 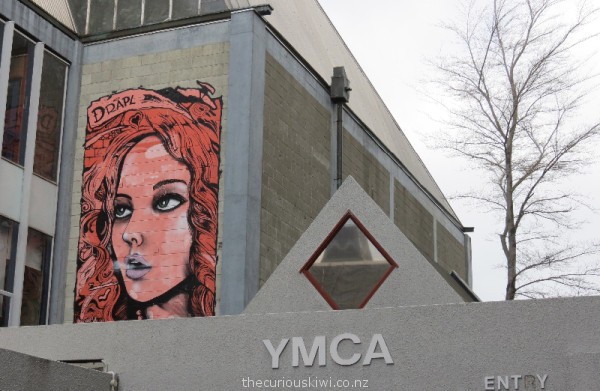 Street art by Drapl on the YMCA building