If you’re visiting Isle of Pines on a cruise ship, chances are a tender will take you to shore where the sandy curve of Kuto Bay stretches out in front of you, with the seaside restaurant at Hotel Kou Bugny in the distance. It’s about an 800 metre walk to Hotel Kou Bugny and you’ll most likely pass BBQ’s and food stalls set up by locals for visiting cruise ship passengers. 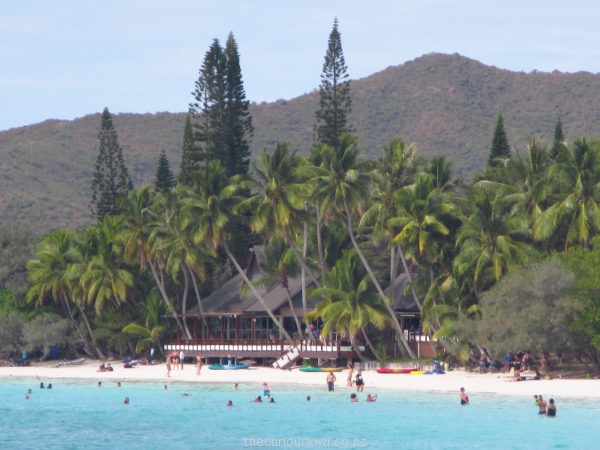 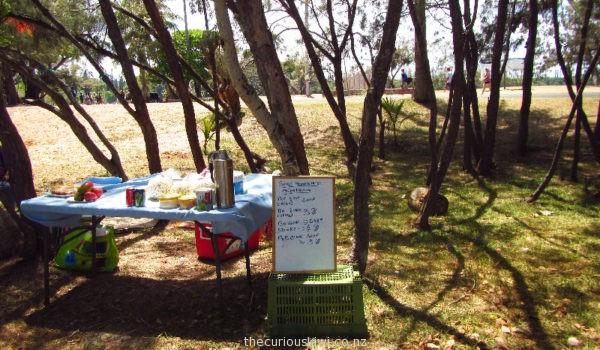 Food and drink stall at Kuto Bay, Isle of Pines

If your plans involve relaxing on the beach you can alternate between the silky sands of Kuto and Kanumera Bays, they are separated by a short walk through trees …. 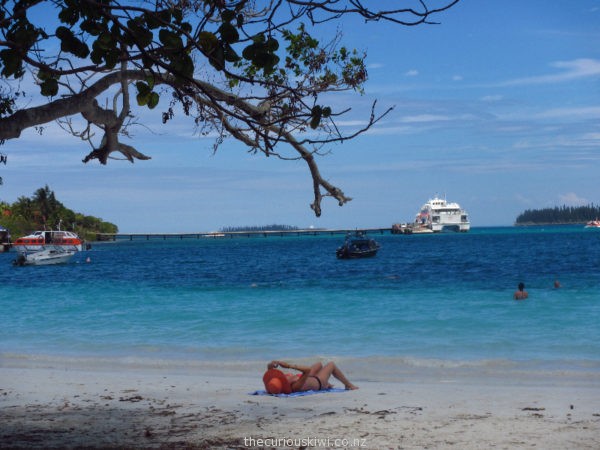 On the beach at Kuto Bay, Isle of Pines 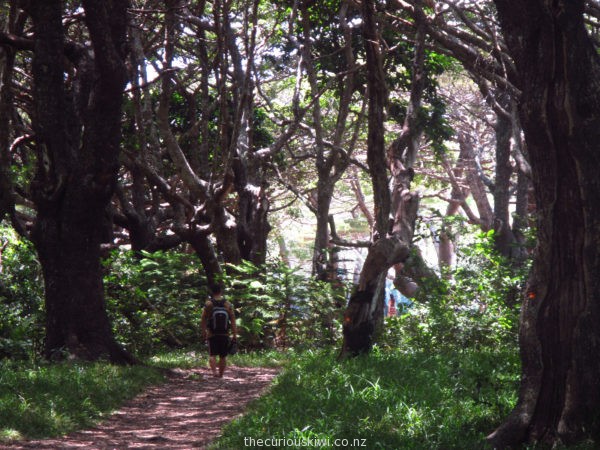 Take a short walk through the trees to Kanumera Bay 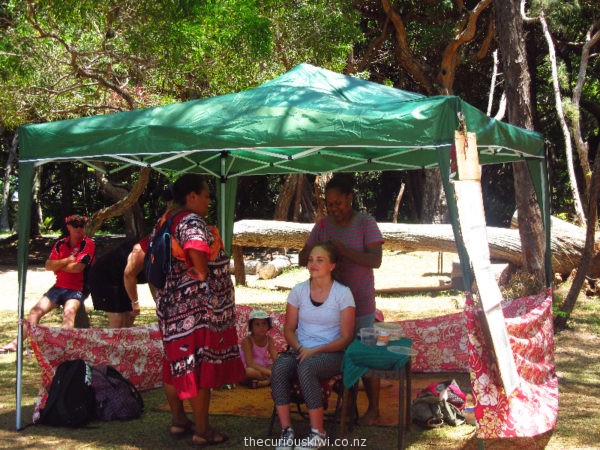 Get your hair braided in Kanumera Bay

Most shore excursions for Isle of Pines had booked out within two days of boarding Carnival Legend, however tour operators were on the roadside at Kuto Bay offering island tours by bus (AUD$25), and boat tours to Turtle Bay and Brush Island (AUD$90). It was low key too which was good, just friendly operators answering questions and letting people decide what they wanted to do. We booked a boat tour with Martiano at The New Caledonia Explorer. 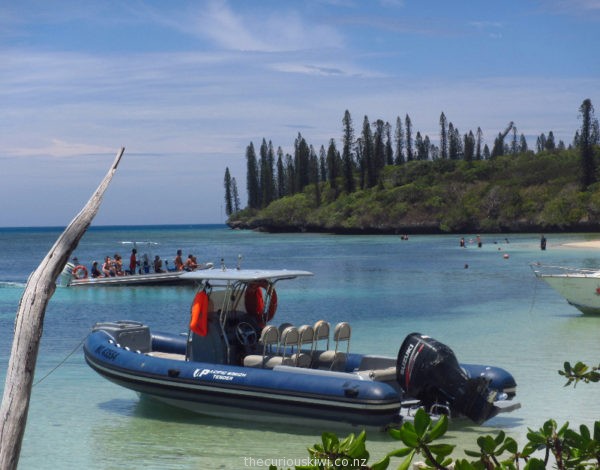 The boat that took us to Turtle Bay and Brush Island

We floated around hopefully in Turtle Bay looking for the main attraction, but it was another tour boat that found the golden turtle ……… 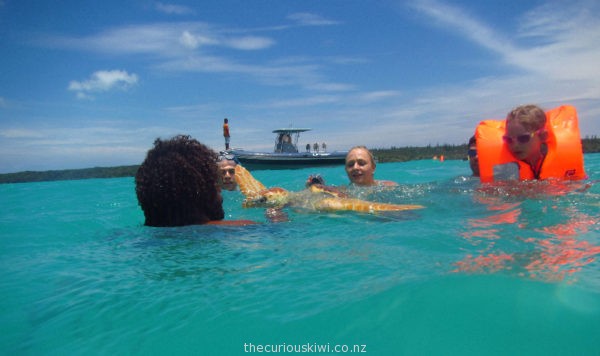 A turtle at Turtle Bay, Isle of Pines

Next stop was Brush Island, and a tip, take everything with you off the boat as it will likely disappear into the distance to pick up another tour group, and you don’t want your valuables disappearing along with it. There’s some rustic seating on Brush Island, but if there is a long drop toilet four of us couldn’t find it, going bush or holding on were our options. 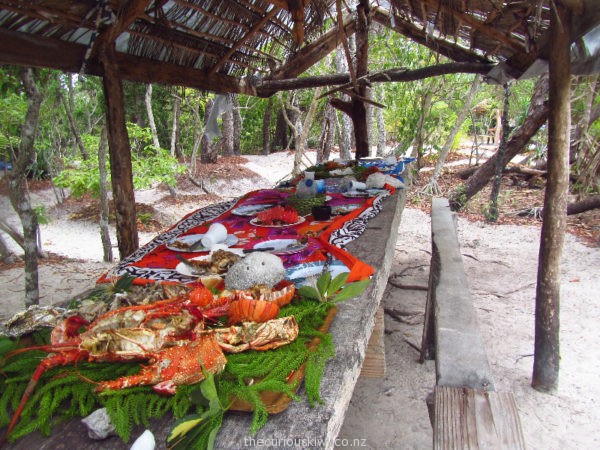 Remains of a seafood lunch on Brush Island

We spent about an hour on Brush Island and I went snorkeling from the beach, it was ok snorkeling but not a patch on Mystery Island. A Picasso Triggerfish seemed to be playing with me – whether it liked or disliked me I didn’t know, but I read they’re territorial, so disliked it was. Word is the best snorkeling on Isle of Pines is in the natural pool in Oro Bay, near Le Meridien Resort. 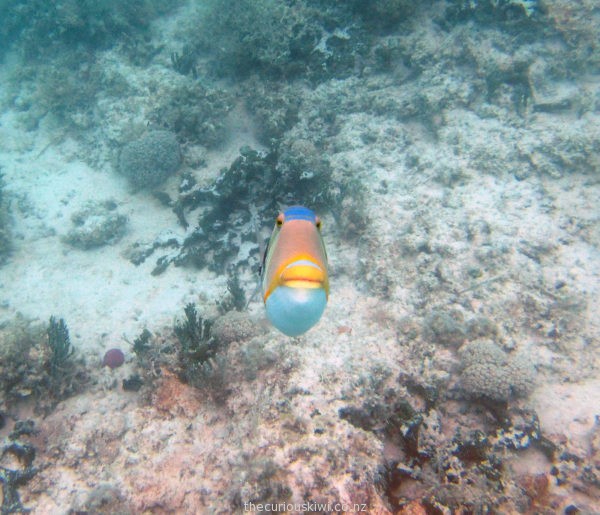 Back at Isle of Pines we headed for the restaurant at Hotel Kou Bugny but the kitchen had closed by the time we got to the front of the queue at 2.30pm. I did get to use 5 of the few French words I know though – bonjour, cafe au lait and croissant. My brain conked out with exertion after that and out came ‘thank you’ instead of ‘merci’ – oh well. The seaside restaurant had the feeling of a place that’s seen better days, and it wasn’t cheap, but it does have million dollar views. 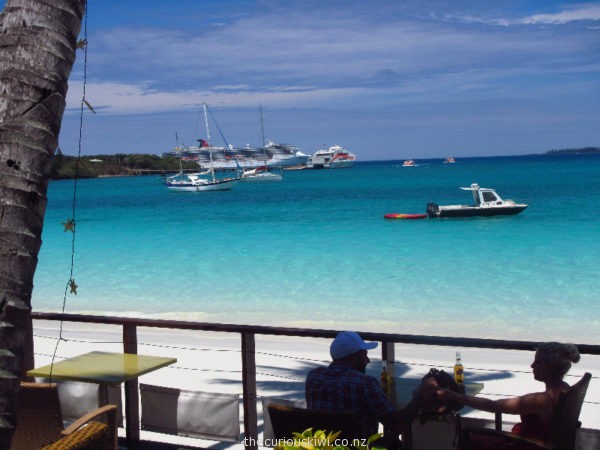 PS. An island tour by bus would have filled me in on some of the island’s history, but there is no missing the tall pine trees (Araucaria columnaris) that gave Isle of Pines its name. The trees can grow up to 60 metres tall and they dominate the landscape on this pretty little isle in the Pacific Ocean.

Tall pine trees dominate the landscape on Isle of Pines