Limp Bizkit sing it slightly differently but cheese will again be rollin’ at the Eltham Downhill Cheese Race on Saturday, April 6 2013. 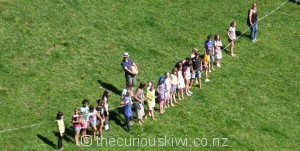 Watch surefooted souls chase a cheese wheel down Cheese Hill. Those who make it can buy an “I Survived” t-shirt, and those with fast feet will take home a cheese wedge trophy. 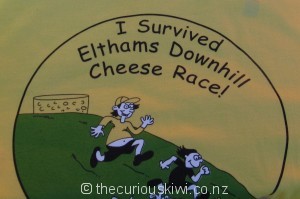 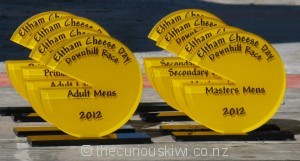 In 2012 boys in blue raced against a Santa who forgot the spirit of Christmas and ran off with the cheese – toward a getaway car full of crackers? You can’t out run the official boys in blue though and Santa would’ve been disappointed if his getaway plan succeeded – the cheese isn’t tasty, Fonterra design it for rollin’ not eatin’.

Cheese tasting wasn’t a starter on Cheese Hill but sausages were sizzling and coffee was brewing as we watched the cheese grating champs. Cheese throwing, face painting and a bouncy castle entertained the kids. In 2013 the Market Day starts at 9am and the cheese rolling races start at 11am – see Eltham News. 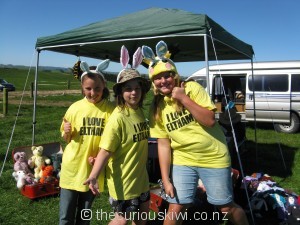 Thanks for the photo girls

Also in Eltham …..
Eltham’s known for its scones and in 2010 set the record for the world’s largest, according to Guinness World Records the scone weighed in at 119.45kg! To try a cheese scone a whole lot lighter head to Eltham Four Square at 156 High Street. 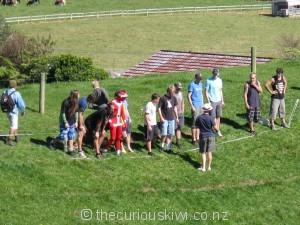 Santa preparing for his cheese caper

If you like to fossick for second hand goods and collectibles there are a few shops in town including The Bank Eclectic Vintage at 51 Bridge Street. Young kids will like the Children’s Toy Wall on Bridger Lane.