Seeing wild Kaimanawa horses on their own turf will be at the top of my bucket list when I make one (Ticked off – Kaimanawa Wild Horses). My dream came a step closer recently when I met 16 year old Jose. Jose was a wild Kaimanawa stallion at 4 years old, now he’s as quiet as they come – put up an umbrella near him, stand on his back, drag something behind him, he’s not bothered. 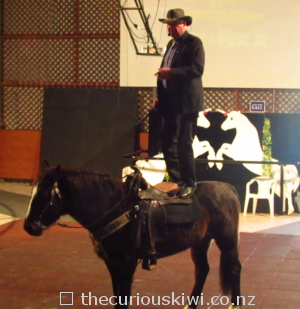 Jose, a Kaimanawa horse at the Horse Magic Show in Cambridge

Jose was part of the Horse Magic Show at Cambridge Thoroughbred Lodge. Riden by ringmaster for the show, and horse trainer Lee Somervell, Jose showed us all what lovely temperaments the Kaimanawas can have. Back in 2012 a former wild horse won Pony of the Year at the Hastings Horse of the Year show so our wild Kaimanawas are very adaptable. (For more information see Kaimanawa Heritage Horses). 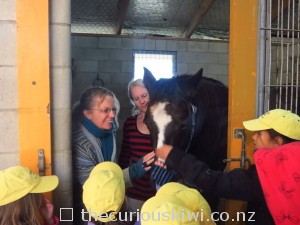 We were also in the company of champions, 27 year old Rough Habit walked out in his royal blue coat. ‘Roughie’ as he was known, won six of his first eight starts, was NZ’s Horse of the Year twice, and appeared on a postage stamp in 1996. Good going for a horse that cost $1,400.00 but went on to earn $5.2 million. 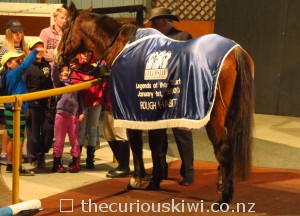 Winner of the Miracle Mile and pacing champion Christopher Vance also paid the crowd a visit. He made us all laugh when he had a go at eating the artificial flowers around the ring, I also had a giggle when I read the following:

“Multi-millionaire horses ROUGH HABIT and CHRISTOPHER VANCE will be given the key to the stables at Cambridge Thoroughbred Lodge on Sunday November 18 (2007) during a charity function from which a donation will be made to the local branch of the Riding for the Disabled Association. A special carrot cake is being made for each horse by Cambridge Thoroughbred Lodge owner Ada Parnwell“. 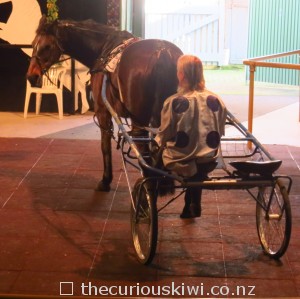 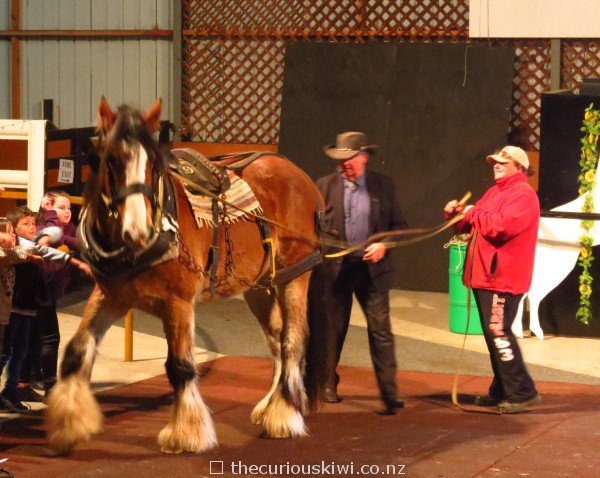 A big part of the show is seeing different breeds of horses, audience participation is welcome. At the end of the show you’re taken on a short tour of the stables and you can get a bit closer to the horses if you’d like to. There were at least 100 children at the show we attended so there was less whip cracking than there might normally be, and the kids would have brought the house down if rides were offered. 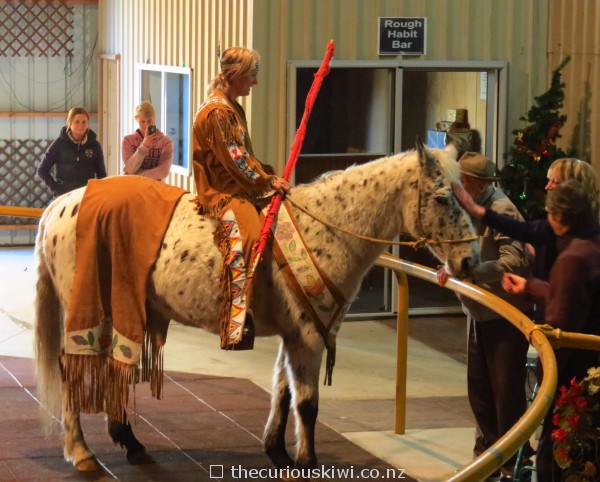 Now for the finale, Lee told us to stay in our seats as a 14 year old spirited black stallion was on his way. The black horse from the old National Bank ads ran through my mind, this is going to be cool I thought, and it was ……..


Details: Horse Magic Shows cost $12 adult, children 2-14 $7, under 2 free, bookings are essential. Tea and coffee is complimentary. Cambridge Thoroughbred Lodge is 6 km south of Cambridge, there’s lots of parking, and wheel chair accessible toilets. Personally I thoroughly enjoyed the show, but I love horses, I do think the word ‘Extravaganza’ oversells it though. Children will probably disagree, I’ll never forget them chanting ‘Come on Stumpy’ 🙂 , it was a pleasure to be in the audience with them. 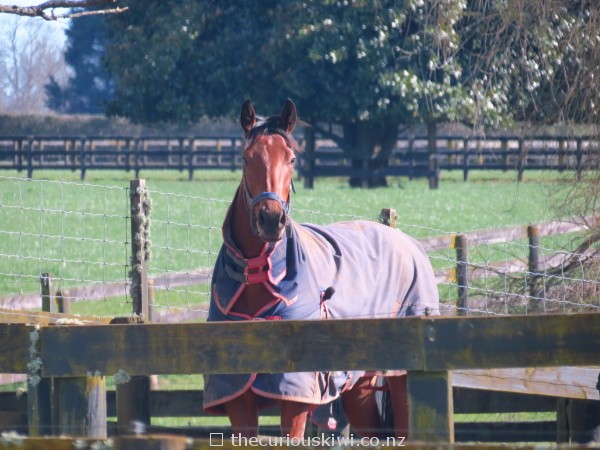 Striking a pose for the camera

2 thoughts on “Horsing around in Cambridge”