I opened the envelope of one of the best birthday presents ever last year – I was going on a bus trip to see Kaimanawa wild horses roaming on NZ Army land in Waiouru. Whoop Whoop – the sound of a dream coming true. The Ranges Trips are organised by Kaimanawa Heritage Horses, I was going in November, so there were two months to wait, and like any trip, the anticipation added to the excitement. I spent time wondering  …

How far would we travel to see our first horse? Not far at all. How many wild horses would we see? We photographed 57 but I’d estimate we saw around 100. How close could we get to the horses? They kept a safe distance but often seemed as curious as we were. 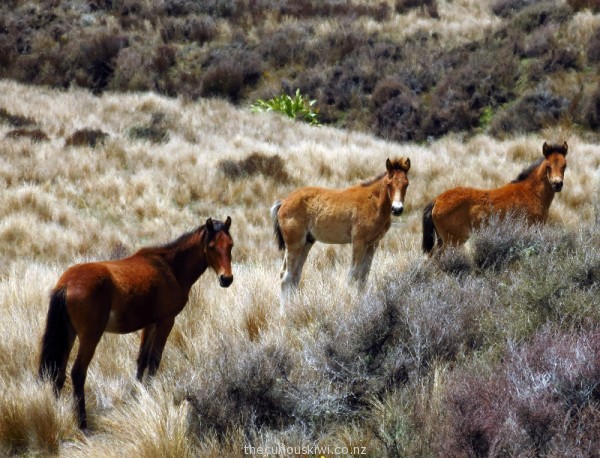 (If there was ever a day when I wished I was more than an amateur photographer it was this one, at the end is a list of professional photographers who have captured the Kaimanawas). 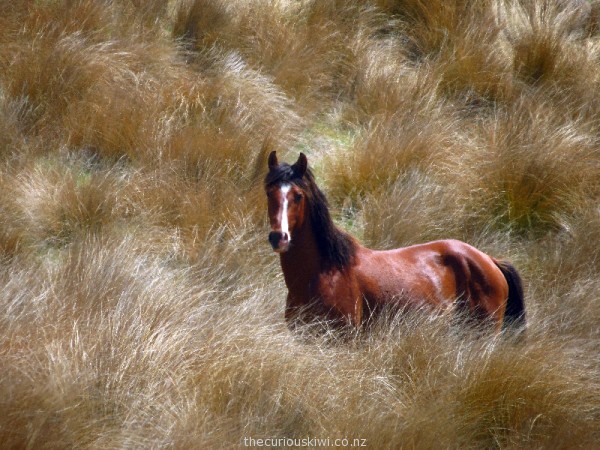 I’ll include some highlights of the trip in this post but for more details see Ranges Trip via Kaimanawa Heritage Horses. The trips are very popular and sell out quickly, you can sign up to get notification of 2016 trip dates (price – $75pp in 2015).

The biennial Muster also takes place this year, a process which involves removing horses from the Kaimanawa Ranges for their welfare, ie. less horses – more feed for all – healthier population. The protection of unique plants is also a factor. The Muster isn’t open to the public but applications are invited from people who are able to take a horse/s which will save them from slaughter. In 2014 homes were found for 147 horses, 15 went to slaughter. 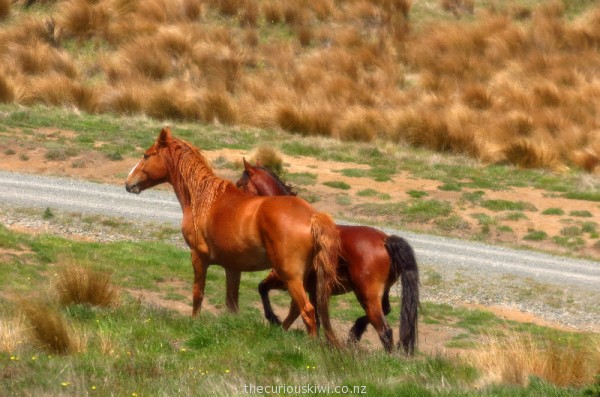 Prior to catching a bus to Waiouru Military Camp we were introduced to horse trainer Mr Paddy Mair and his former wild stallion Kachina. Paddy and Kachina showed us how quiet, clever and beautifully natured Kaimanawas can be. Kachina came second in the 2014 Stallion Challenge, an event where trainers demonstrate the qualities and talents of the former wild horses.

The Challenge was set up to show that wild Kaimanawas aren’t just horses to be rescued, they can be just as capable as domestic horses in terms of ability and performance. We met a former wild Kaimanawa stallion a couple of years ago in Cambridge so it’s the second time we’ve seen how wonderfully natured these horses can be. 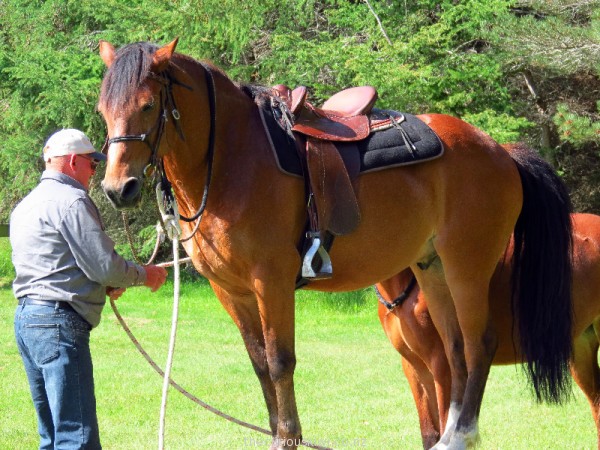 Our first stop at Waiouru Military Camp was to hear Major Hibbs talk about the NZ Army and what happens in Waiouru. We don’t know much about the Army and found it really interesting, did you know they explode all the left over fireworks from Guy Fawkes – 5000 tonne at a time!

As seeing the horses means entering the Waiouru Military Training Area we were also made aware of safety issues and needed to sign a waiver. Basically, if you come across anything remotely looking like an explosive call the Major quick smart. 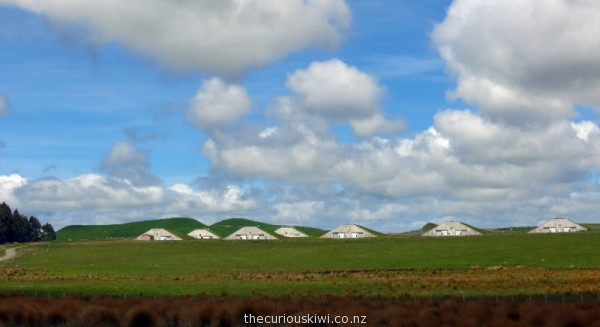 The next part of the trip took us down a gravel road through the Military Training Area and into Kaimanawa horse territory. I was peering hopefully out the window and it wasn’t long before three horses appeared on the distant horizon, their chestnut colouring blended in with the red tussock but they stood out against the low slung clouds. The horses were too far away for us to photograph, but close enough to make an enduring memory. 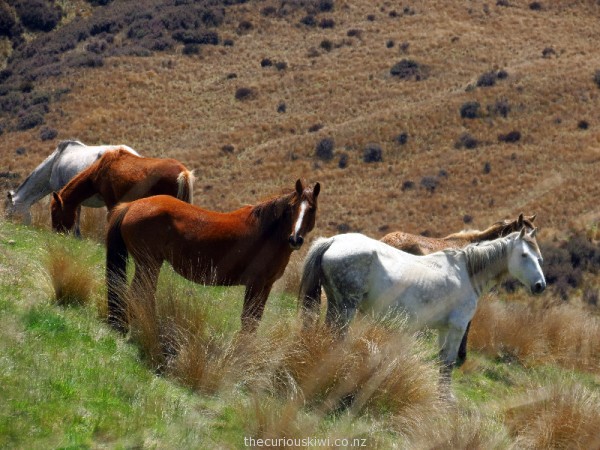 One of the first groups of horses we saw

We were lucky enough to have Kelly Wilson (from Keeping Up With The Kaimanawas) on our bus for a short time to share some of her history with the horses. Kelly is especially passionate about saving older horses from slaughter.

In 2012 she made a connection in the Ranges with a stallion she later named Major. Kelly was able to save Major from slaughter, and despite his 17 or so years in the wild he proved to be a wonderful horse who adjusted quickly and was very trainable. Major is no longer with us but he inspired Kelly to create the Stallion Challenge mentioned above, a challenge that is open to stallions over three years old. 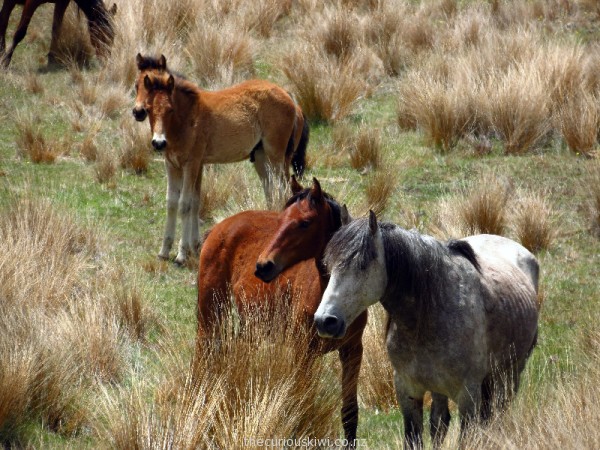 Kelly also told us that the horses aren’t as territorial as people might think, but they tend to stay together in their family groups. 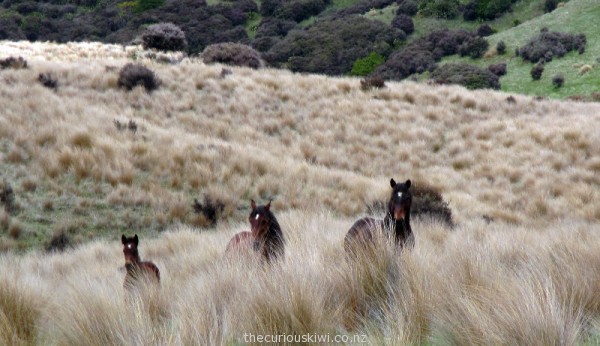 As the photos show, the horses are a variety of colours. The Kaimanawa wild horses aren’t a genetically unique population, they are the result of a variety of breeds including Exmoor Pony, Welsh Stallions and local horses that were released, or escaped from nearby farms. An Arab stallion is also said to have been released in the area in the 1960’s. I’ve also read that race horses were sometimes set free on the Desert Road if they performed poorly, I’m not sure if that’s fact or fiction. 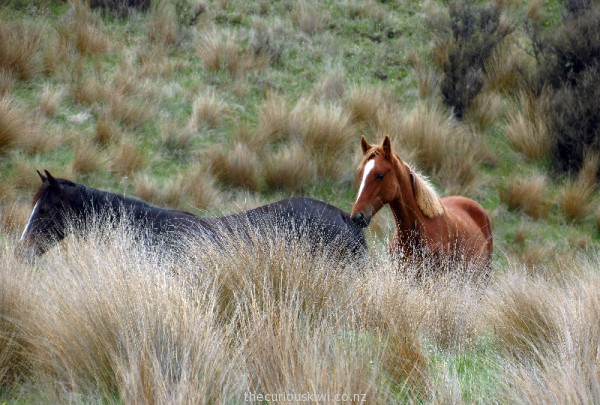 The buses (there were three of them) stopped often on the trip for us to get out and take photos, there was also a lunch stop at the muster yards. If you’re interested in the muster process see the 2014 Muster video and article via Stuff. 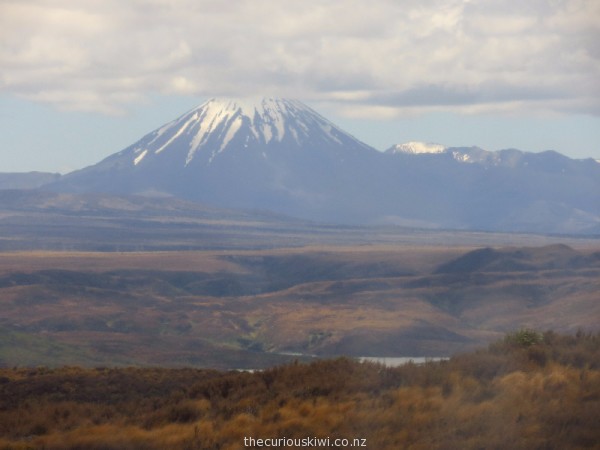 A hazy photo of Mt Ngauruhoe

I loved the landscape we drove through, red tussock runs as wild as the horses and wide green plains sit at the base of tall scrub covered hills. When two horses trotted up to meet us I wondered if we’d become extras in a Western style movie, no, we were just fortunate guests of the Kaimanawa Ranges. 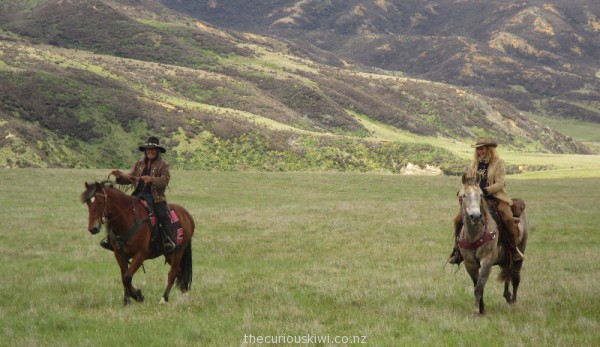 Tommy Waara and friend riding up to meet us

Our last stop for the day was a beautiful little pocket of green, for the first time in a while I wanted to pitch a tent, and stay for a few days in the shadow of the horses that will always mean freedom to me. 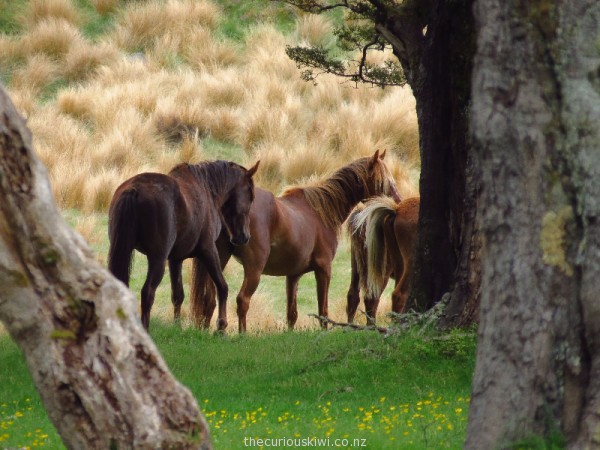 (Special thanks to Kaimanawa Heritage Horses for organising the Ranges Trips, I can’t recommend the trip highly enough. Like many people, I’ve travelled the Desert Road and passed the yellow wild horse road signs hoping to catch a glimpse of the elusive wild Kaimanawa, at last).

Further information & professional photographer links:
There’s lots of information on the Kaimanwa Heritage Horses website including a variety of ways their work can be supported, they also have an active  Facebook page.

Department of Conservation information about Kaimanawa Horses and their environment.

Photographer and blogger Lynn Clayton has written a blog post about wild horses in New Zealand and has photos from her trips into the Ranges. The photo underneath the outhouse is on the front of the 2016 Kaimanawa Heritage Horses calendar.