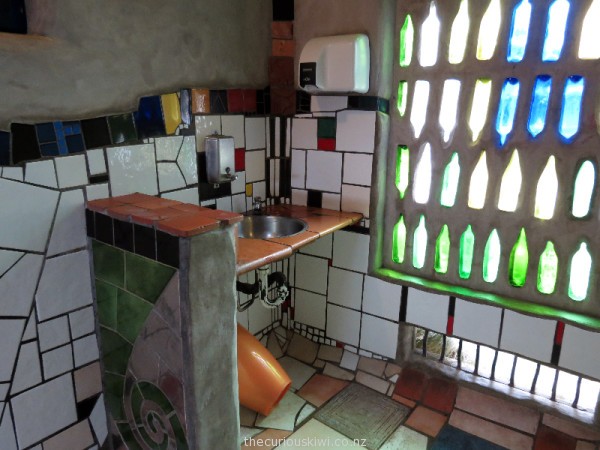 The toilets are built around a living tree and have a roof top garden, reflecting Hundertwasser’s environmentally considerate approach to architecture. 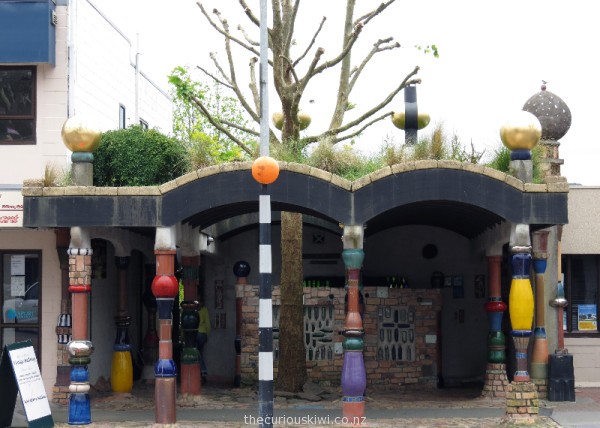 Hundertwasser didn’t like straight lines or flat floors, I suspect the residents in the Waldspirale apartment complex he designed in Germany don’t mind at all. Kawakawa is the only place in the Southern Hemisphere where you can see (and experience) a Hundertwasser designed building, and you don’t even need to spend a penny. 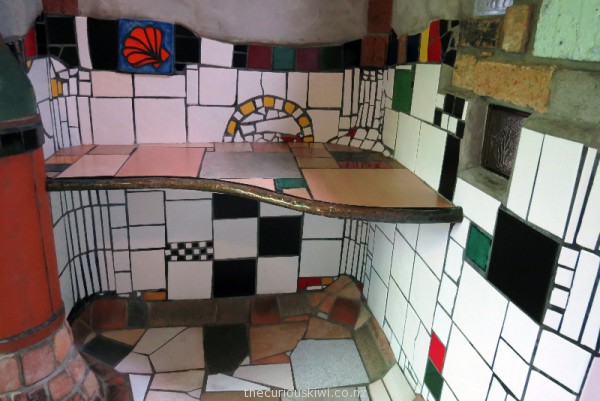 No straight lines or flat floors

Down the road (163 kms) from Kawakawa you will find the country village of Matakana. In 2002 a competition was held to design a public toilet. The winning design was created by first year Elam School of Fine Arts student and local Steffan de Haan. 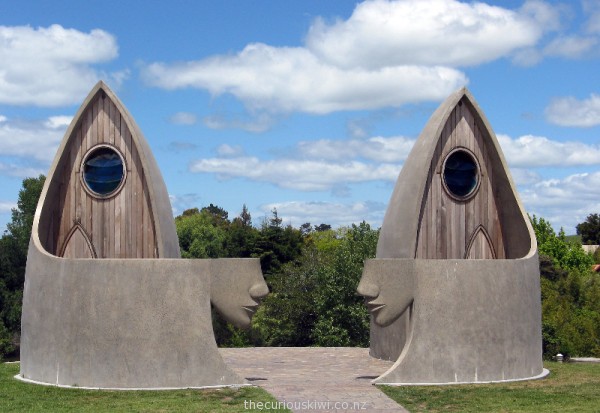 The shape of the toilets references the hull of a boat, a nod to the history of boat building in the area. It took seven years for the toilets to be completed, worth waiting for I think as the design is quite elegant.

Continuing the boat theme is the neat pirate art work on the toilet walls at the Jolly Roger Pub in Pine Harbour. 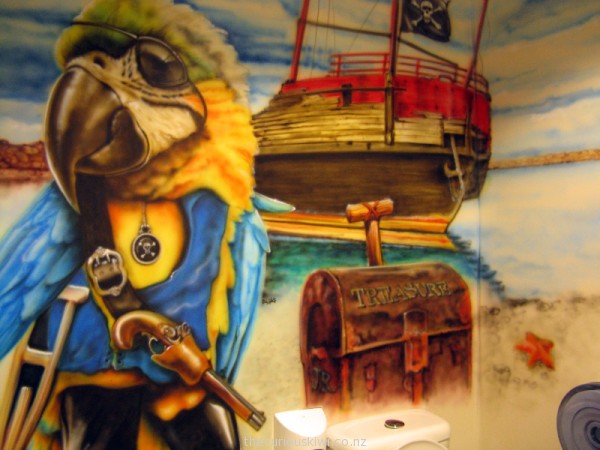 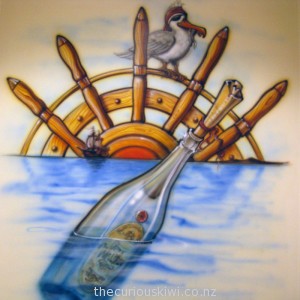 Mirror, mirror on the wall, does Brew on Quay in Auckland have one of the prettiest women’s toilets of them all? I think so, which is why it’s included. 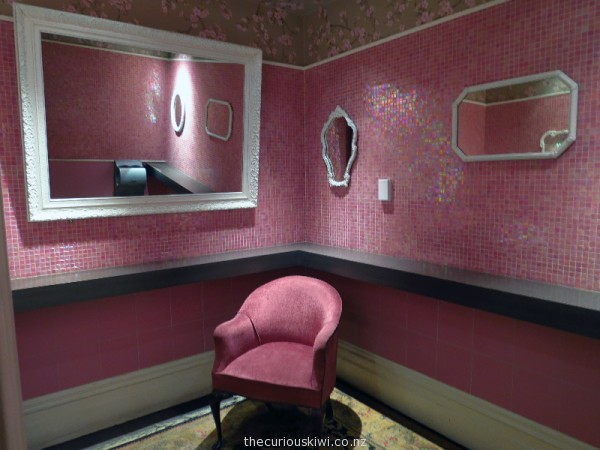 Women’s toilets at Brew on Quay in Auckland

On the way to Tauranga you used to be able to take a seat on a golden throne at Corogate Cafe. The toilet set up was well thought out – the little sign below the shield says ‘England Expects That Every Man Will Do His Duty’, the flag signal sent by Lord Nelson just before the Battle of Trafalgar. A statue of Lord Nelson watched over customers to ensure that duty was done. (The cafe is no longer open). 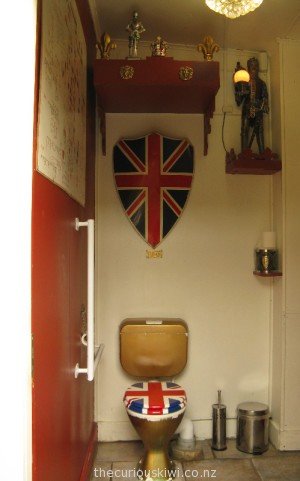 In Tirau, the corrugated iron capital of New Zealand, a 24 hour toilet sits just under the left ear of an enormous dog. 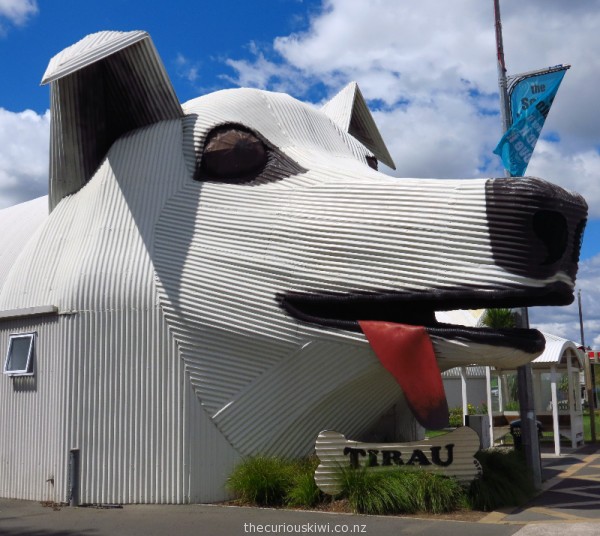 The Redwoods Whakarewarewa Forest in Rotorua has a collection of cylindrical toilets that replicate the trunks of the surrounding California Redwoods. The exterior (or shroud) of the toilets is made of a type of steel that forms a rust like appearance, so the colour is also similar to the trees. Maori kowhaiwhai patterns and contemporary native bird images are blended in the exterior design and add to the forest theme. The toilets get my vote for being most at home in their environment. 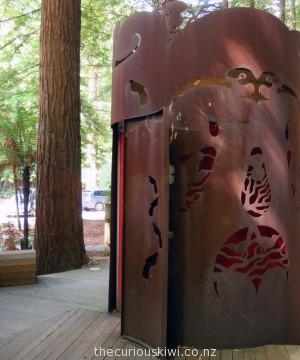 Toilets at The Redwoods Forest in Rotorua

Napier is all about Art Deco and that includes the mural on the public toilets on Marine Parade. 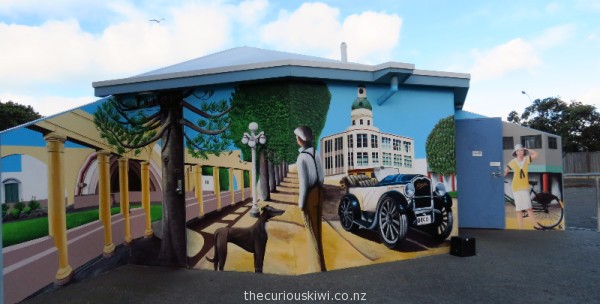 You can do time in the old jail toilets at Ongaonga in Southern Hawkes Bay. 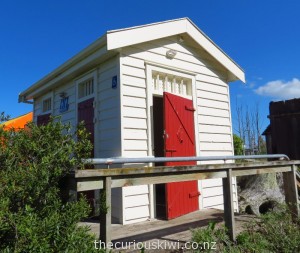 At Tui Brewery in Mangatainoka beer kegs have been recycled into seats, and urinals. At the Fork & Brewer in Wellington you will find basins inside wine barrels, they definitely look more visually appealing than bog standard basins in a line. 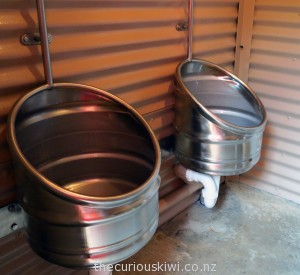 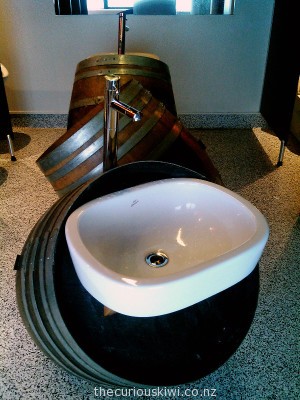 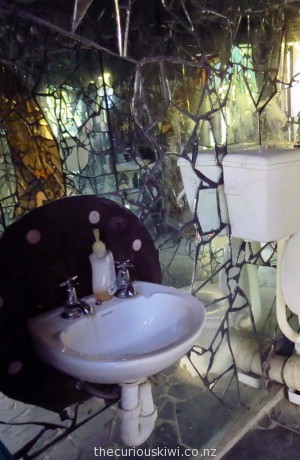 At the Bangalore Polo Club in Wellington the deep red and black Asian influenced decor continues all the way into the women’s toilets. It’s a pleasant surprise when you find that as much care and attention has been used to design the little rooms as it has when designing the rest of the building, nice work Bangalore Polo Club. 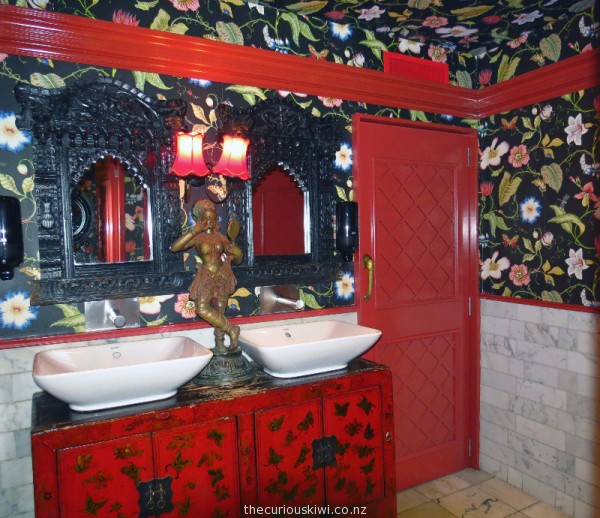 On the Wellington waterfront there are a pair of unusual public toilets that were dubbed lobster loos, crayfish crappers, and designer dunnies when they opened in 2011. DesignCurial included the toilets in The world’s 10 best public toilets for 2015 so Wellington’s a winner when it comes to unusual toilets. 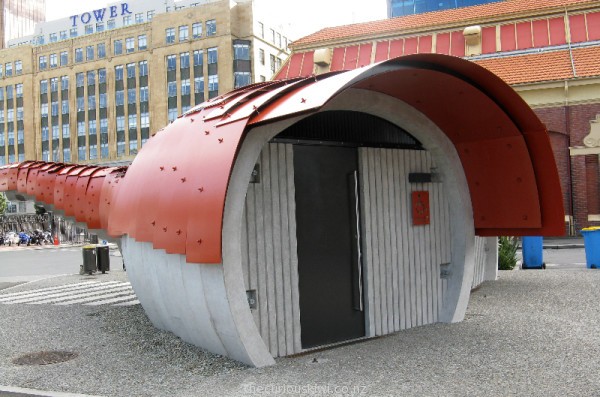 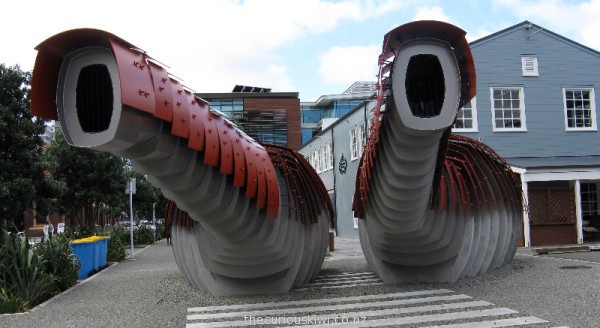 2 thoughts on “13 Unusual Toilets in the North Island”