Following on from the Auckland Street Art post, I walked around the K’ Road area with a 2015 All Fresco Public Art Festival* map in hand. I couldn’t find all 10 new works and I think a couple may have been painted over, or I was looking in the wrong place. Here’s five I did find: The striking portrait by Owen Dippie is on the side of an apartment building on Canada Street (at the top of Upper Queen Street). You can see ‘Hine’ from the motorway, beats looking at the traffic that’s for sure. (Number 6 on the map).

I was initially puzzled by Askew One’s mural ‘Vegan To’ona’i’, but To’ona’i means feast or meal in Samoan. I now recognise bananas, coconuts and taro leaves. (Number 1 on the map, located on Mercury Lane). Vegan To’ona’i’ by Askew One

This vibrant Zig Zag Boutique mural by Xoe Hall lights up a wall in East Street. (Number 7 on the map). 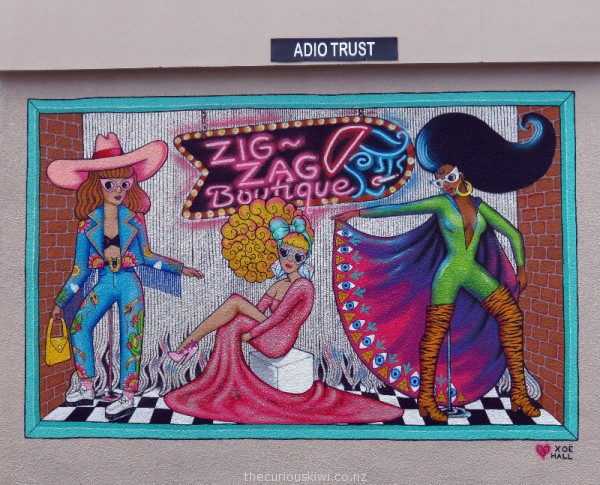 I don’t know why, but this work by Haunt One makes me want to eat marshmellows. Find it on Poynton Terrace. (Number 4 on the map). Mural by Haunt One (Misery & Tom Tom work in the background)

The mural by Cinzah Seekayem on the corner of K’ Road and Ponsonby Road is 30 metres long, I found it difficult to capture in the rain. (Number 8 on the map). Continuing with street art in Auckland, artist Paul Walsh has done a few portraits on the Rockshop at 100 K’ Road, his latest is a tribute to the late David Bowie. The portrait shows David Bowie’s unusual eye clearly – the pupil in his left eye was permanently dilated, the result of being hit by his best mate when he was 14. Tribute to David Bowie by Paul Walsh on K’Road

Paul has also painted Utility Boxes around Auckland, including the super cool ‘Student Cat’ on Symonds Street near the City Road intersection, and ‘Ponsonby Pigeon’ on Ponsonby Road. Next I headed to Newmarket to Gordon Harris at 4 Gillies Avenue to see the wonderfully colourful work by Flox. Around the corner in the car park is a beautifully layered mural that includes Rutu and Cass Railway Station (both originally painted by Rita Angus). The mural was painted by Jonny4Higher, it’s much bigger than is shown here, I took a section without cars in it. Also in Newmarket, if you go down Nuffield Lane next to Otto Woo noodle bar on Nuffield Street you may see the street art below. I don’t know if the art works are authorised to be there so they may get painted over, I hope not as they make the Lane a much friendlier and nicer place to be.