Maybe I have too much time on my hands, but after seeing the neat historical clock in the Old Bank Arcade in Wellington I thought I’d look for other curious clocks around the country. There’s no better place to start than a clock museum ….. 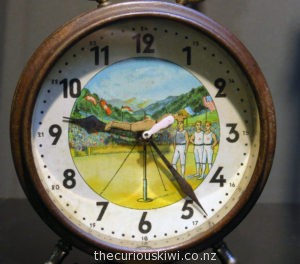 Archibald was an aspiring clock-maker turned clock collector and he welcomed people into his home to see his many clocks. He was known for his sense of humour and his favourite clocks had unusual moving parts like the Dickory Dickory Dock Clock – the clock strikes one and down the mouse runs …… 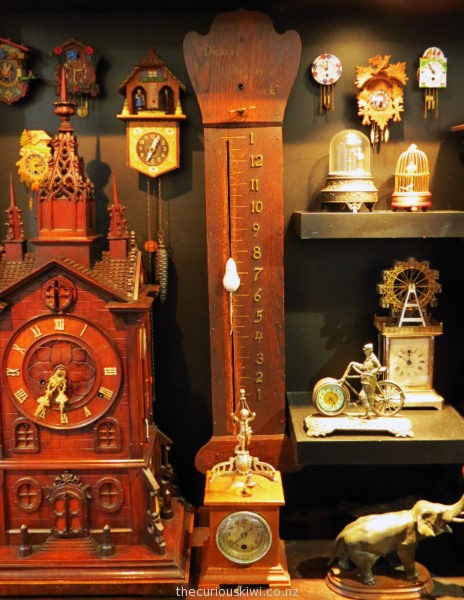 The Oswald Company in Germany made these curious clocks – the eyeballs rotate to tell the time, one eye tells the hour, the other the minutes. 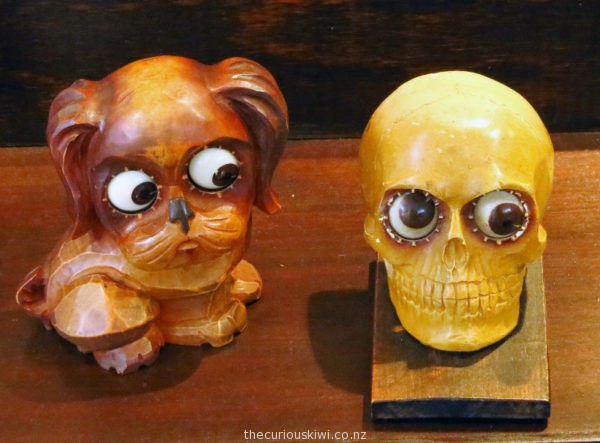 Below is a large Hunting Clock made in Germany circa 1890. Incorporated into the clock design are all sorts of things associated with hunting – guns, a stags head, a rabbit, an ammunition pouch and a bird. 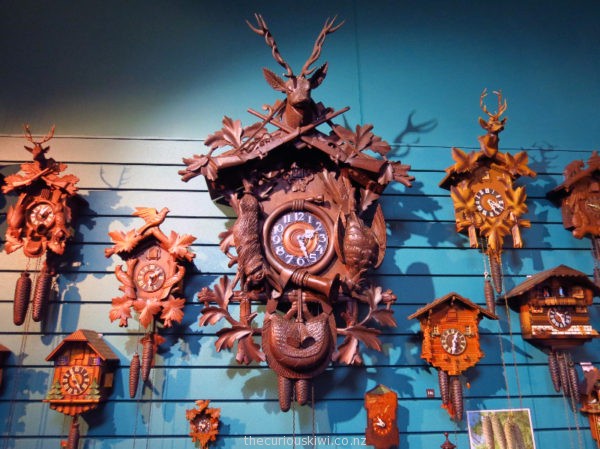 Entry to Claphams Clock Museum is $10 adults, children $4. While inside the museum you hear the sounds of ticks and tocks and cuckoo clocks, outside the museum the giant sun dial tells the time in silence, at least it does when the sun’s shining. 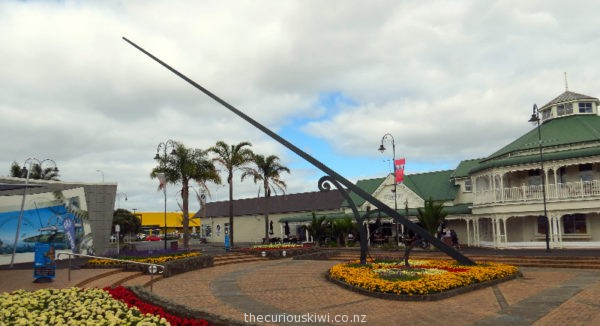 Auckland Floral Clock
There is a floral clock in Albert Park in Auckland that was built in 1953 to commemorate the first visit to New Zealand by Queen Elizabeth II and Prince Phillip. The clock was donated by Mr & Mrs Robert Laidlaw, Robert Laidlaw being the founder of Farmers Trading Company, known now as Farmers. 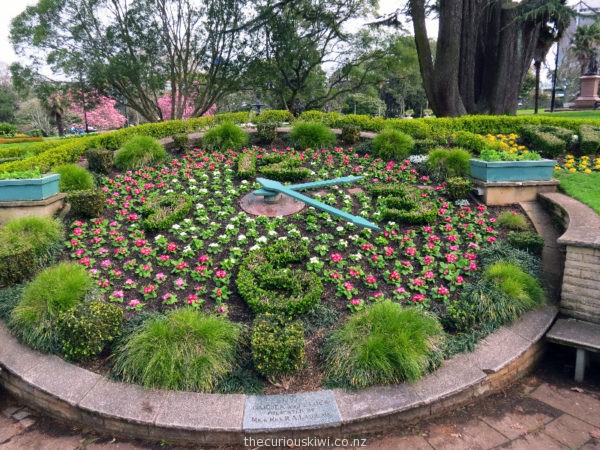 The Waterworks, 471 The 309 Road, Coromandel Town
The Waterworks has all sorts of curious contraptions including a large water powered pendulum clock. (A blog post about The Waterworks). 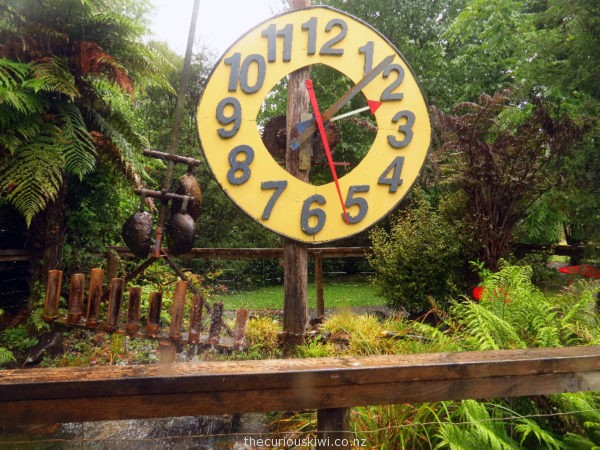 Water powered clock at The Waterworks

Clock World & Longitude Cafe, Ohaupo
You can buy clocks and coffee at Clock World in Ohaupo. When I visited they were selling what could be the Kiwi version of the cuckoo clock – a Hannah Holstein cow clock with a cow that pops out on the hour to moo. 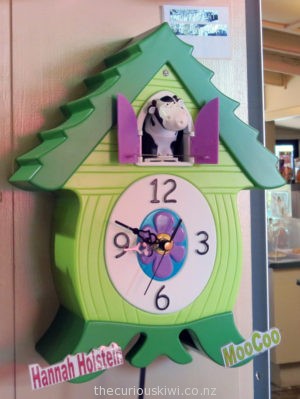 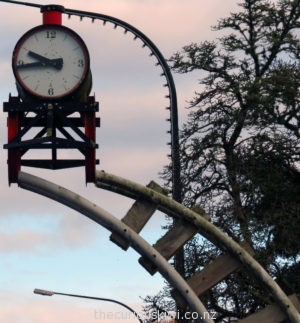 Stratford Glockenspiel, Broadway
Glockenspiel means playing clock, the Stratford glockenspiel plays part of the Shakespearean love story ‘Romeo and Juliet’. Romeo and Juliet pop out of various places in the clock tower before uniting on the balcony, their movements are accompanied by music and spoken words. The glockenspiel plays for about 5 minutes after the clock bells have rung at 10am, 1pm, 3pm and 7pm. If you don’t know that Stratford is dairy farming country it’s likely you will after stopping to watch the glockenspiel, milk tankers continuously pass by. 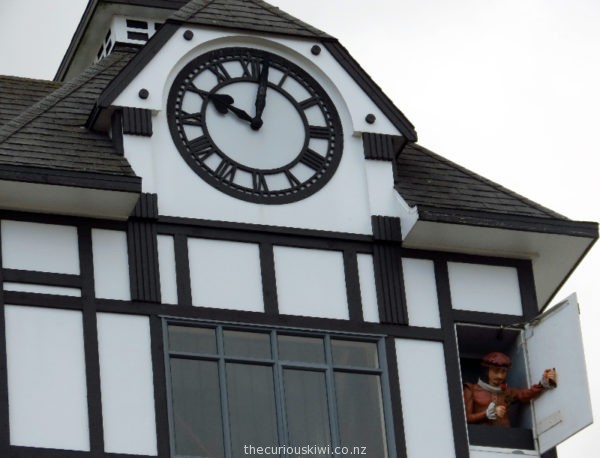 Stratford was once called Stratford-on-Patea but it must have been decided that it should have a connection to Shakespeare’s birth place – Stratford-Upon-Avon in England. Many of Stratford’s streets are named after Shakespearean characters and the glockenspiel continues that theme. While the love story the glockenspiel tells is set on distant shores, the mechanics were made by a local engineering firm and the wooden figurines were made by the talented Nigel Ogle, the man behind Tawhiti Museum in Hawera. 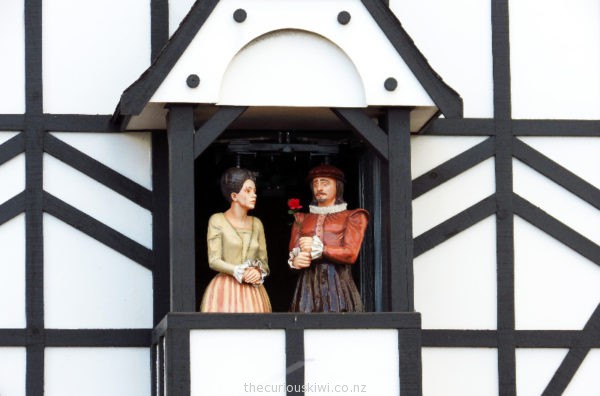 Colyton Clocks, Colyton (8km from Feilding)
If you’re a travelling horologist (maker of timepieces) or just like clocks, I’ve read that Colyton Clocks near Feilding has a collection of over 3000. 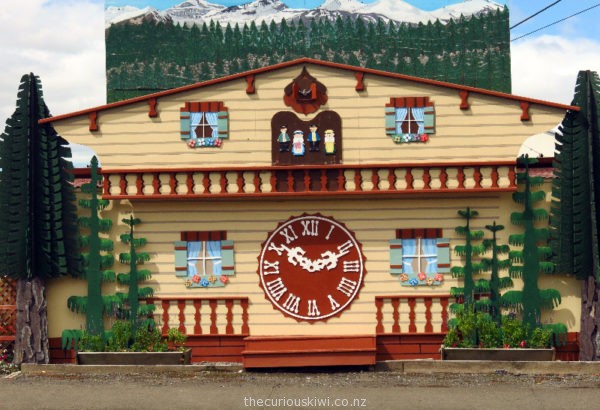 Napier Floral Clock
Napier’s floral clock is on Marine Parade and was given to its citizens by Mr and Mrs AB Hurst in 1955. Mr Hurst was a member of the Thirty Thousand Club, a club that fundraised for the development of Marine Parade. One of the aims of the Thirty Thousand Club was to promote Napier and get its population to 30,000, the population reached 30,000 in the 1960’s but the club continued until the mid ’70s. 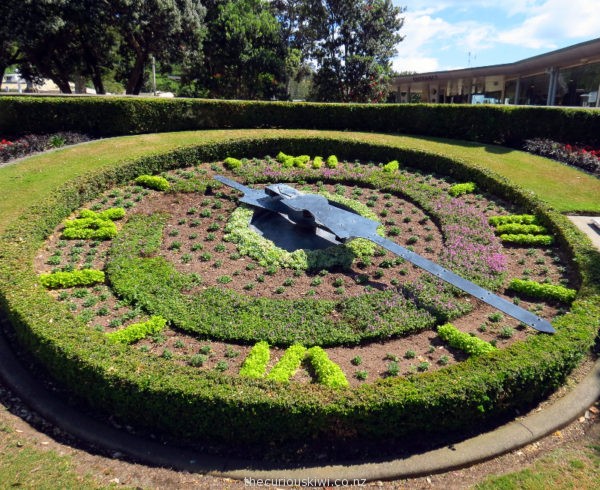 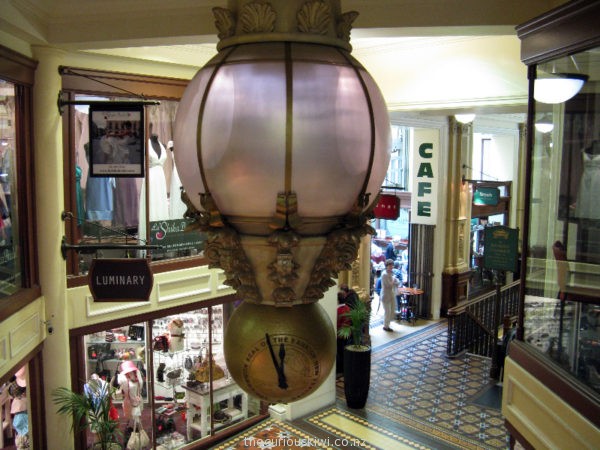 Every hour on the hour the clock opens up to show and tell part of Wellington’s history – a Union Jack flag is raised, a trumpet is sounded, and a construction worker pops his head out of a hole, it’s neat. 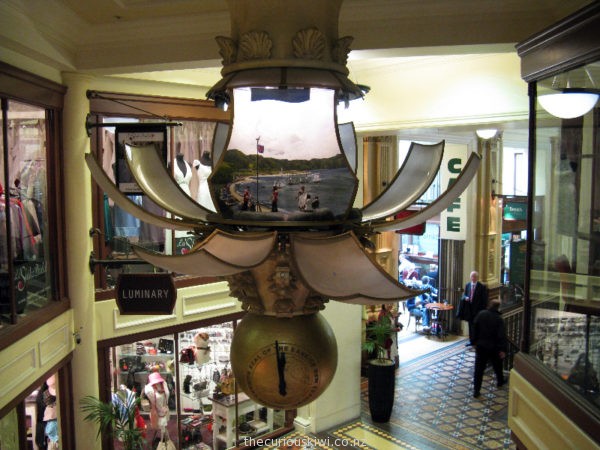 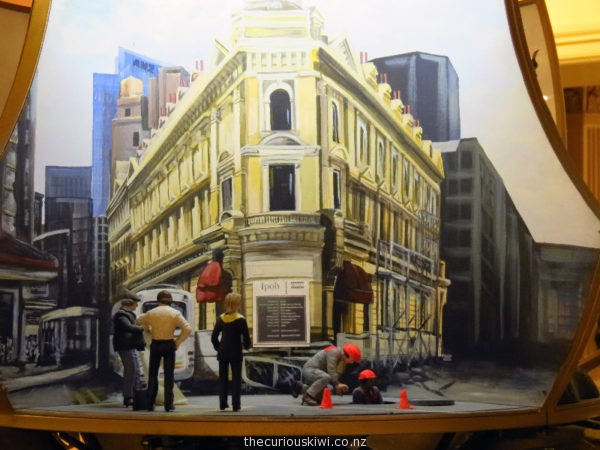 Apartment in a Clock Tower
You would always be on time if you rented this unusual apartment in the Quest Wellington building.

Christchurch Floral Clock
Both the Christchurch and Auckland floral clocks were gifted to citizens by the owners of retail chains. The floral clock on Victoria Square in Christchurch was given by Calder McKay Co Ltd in 1953, the stores were bought by Farmers Trading Co in 1970. 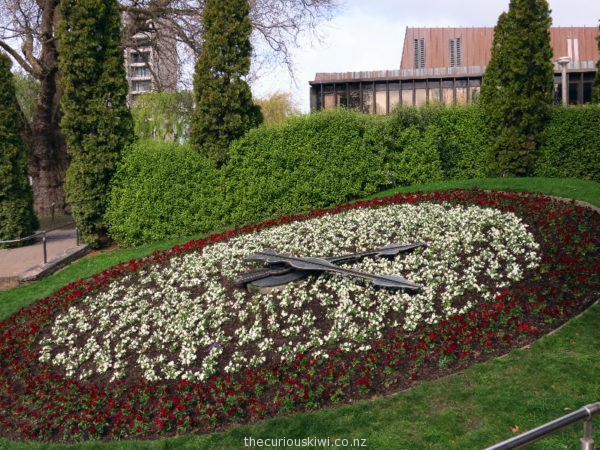 One of the nice things about floral clocks is that they can easily be changed by planting different types of flowers and altering the design, something that might not have happened to the Christchurch clock for a while. 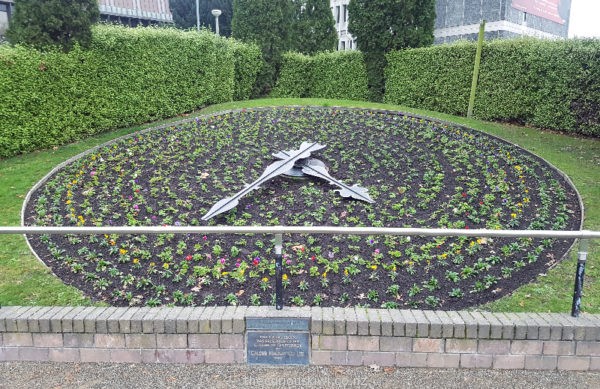 Naseby Watchmaker Shop, Central Otago
There is a little emerald green Watchmakers Shop on Leven Street in Naseby that’s been standing since the Maniototo gold rush days. Listed as a historic place, it was opened by Robert Strong in 1868 and taken over by his son William until it closed in 1967. The shop isn’t open to the public but you can view the watches and clocks inside by visiting the Jubilee Museum next door. (Both the Maniototo Early Settlers Museum and the Jubilee Museum close in winter). 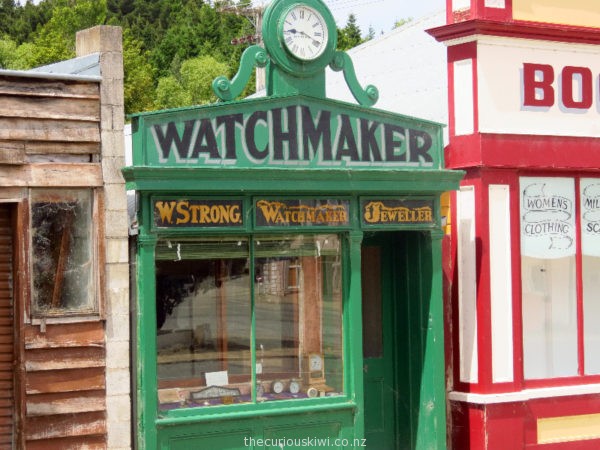 Alexandra Clock, Central Otago
The large Alexandra Clock sits high on a rocky ridge above the Shaky Bridge on Kerry Street. The clock is 11 metres in diameter and each hand weighs about 270kgs! The  Alexandra Jaycees spent over 1000 hours working on the clock and a 30.5 metre rail line needed to be built on the cliff face to transport the 760kg clock mechanism. 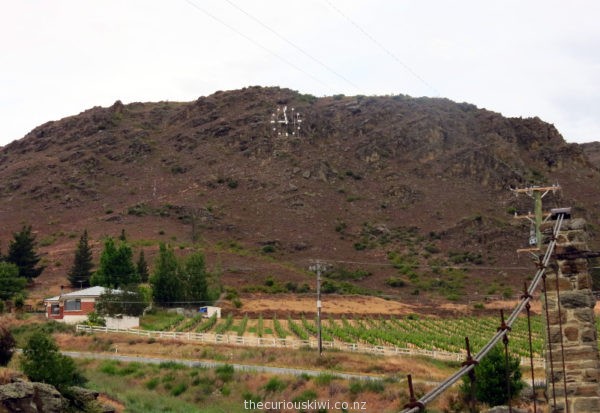 The clock lights up at night courtesy of 150 torch bulbs and it’s said it can been seen up to 8 kilometres away. You can get up close to the clock by walking up a steep, rocky track to the clock face. 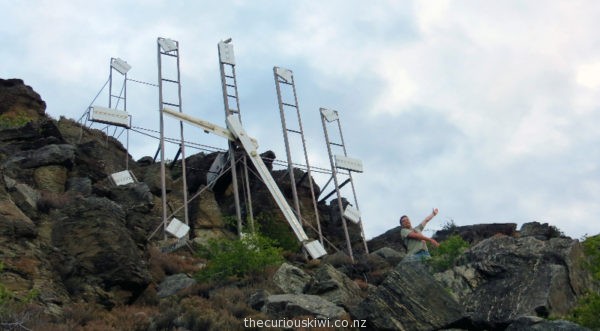 If you know of other curious clocks around New Zealand I’d love to add them to my collection.

PS. A couple of curious clocks from overseas – the Wake ‘n Bacon alarm clock, and the clock that knits a 2 metre scarf in a year.