Years ago I was leaving Sydney by train, there was so much tagging and graffiti on walls and wagons with so many angles, layers and colours it turned into one long amazing art work to me. From that experience I was primed to appreciate art on the street, the kind that brightens up backs of buildings and dull concrete walls.

Unlike taggers whose work is not welcome, street artists like Owen Dippie (OD) are being commissioned for projects like ‘Larger Than Life’ – a series of murals on Tauranga’s walls. Supporters of the project hope it will attract tourists, it’s worked, Owen’s art has already drawn us to Tauranga and some of his work will feature in a later post. (OD leaves his mark in Mount Maunganui). 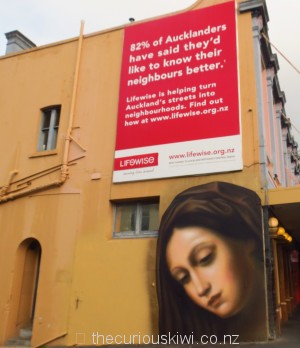 Art work by Owen Dippie, on Pitt Street – All Fresco 2014

Owen also took part in this years All Fresco Public Art Festival held in Auckland from 1 – 4 May. The festival is an initiative by the K* Road Business Association, in its second year, it has enabled around 20 murals and art works to add more character to this already gritty, alternative neighbourhood. Follow the link above to download a map showing the locations of the art works added in 2014. The phone app has a map of around 23 works on and around K Road. 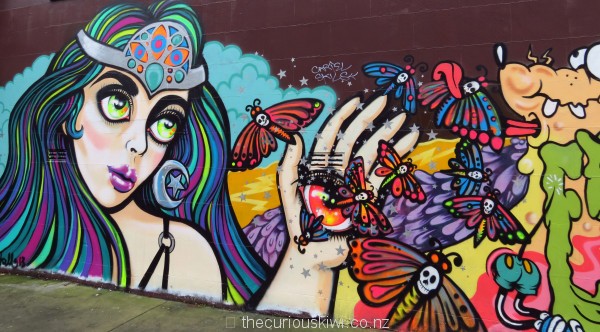 Painted by Xoe Hall, on Cross Street – All Fresco 2013

Part of the team at K Road Business Association is Ross Liew, an artist and former curator of Taupo’s Graffiato Street Art Festival. If you walk through the alleyways in Taupo that connect the shopping area you’ll come across plenty of vibrant murals. If you’re interested in street art in NZ the website Street Arse (‘street art without being too serious about it’) is worth visiting. Street Art Utopia is what it says on the label – it took me on a street art adventure around the world. For now I’ll just take you to Auckland ……. 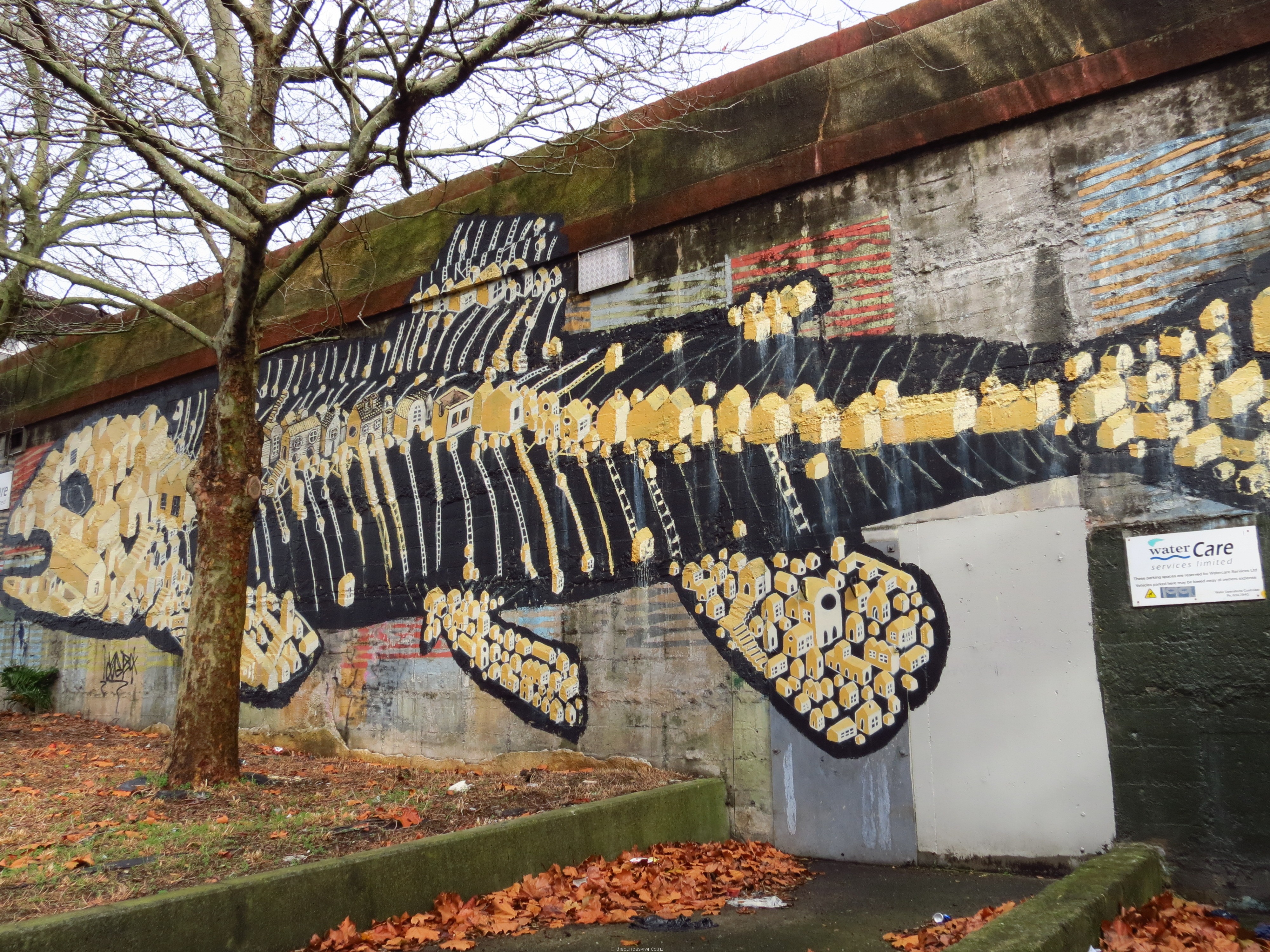 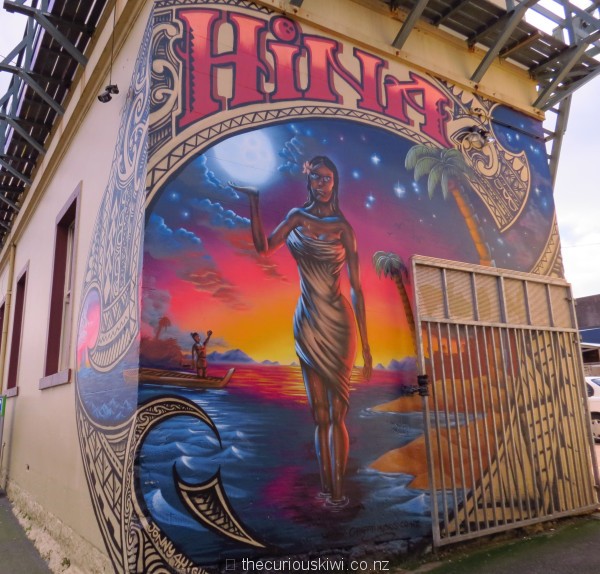 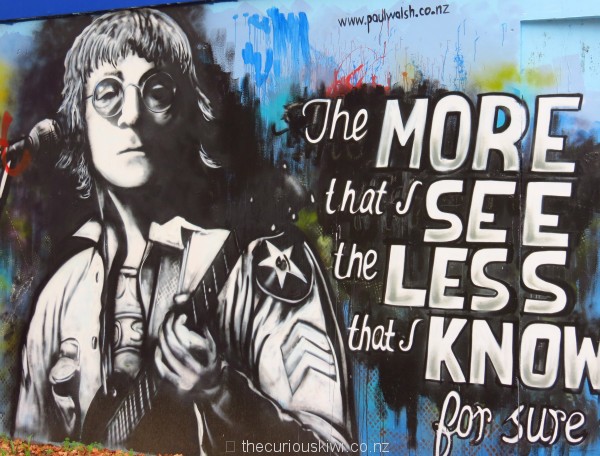 John Lennon by Paul Walsh, on the Rockshop, 100 K Road 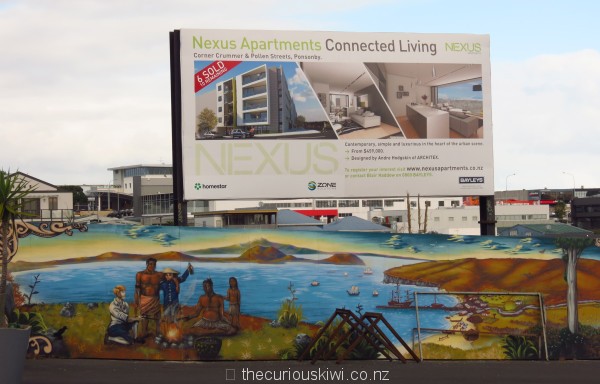 A new hood on the way 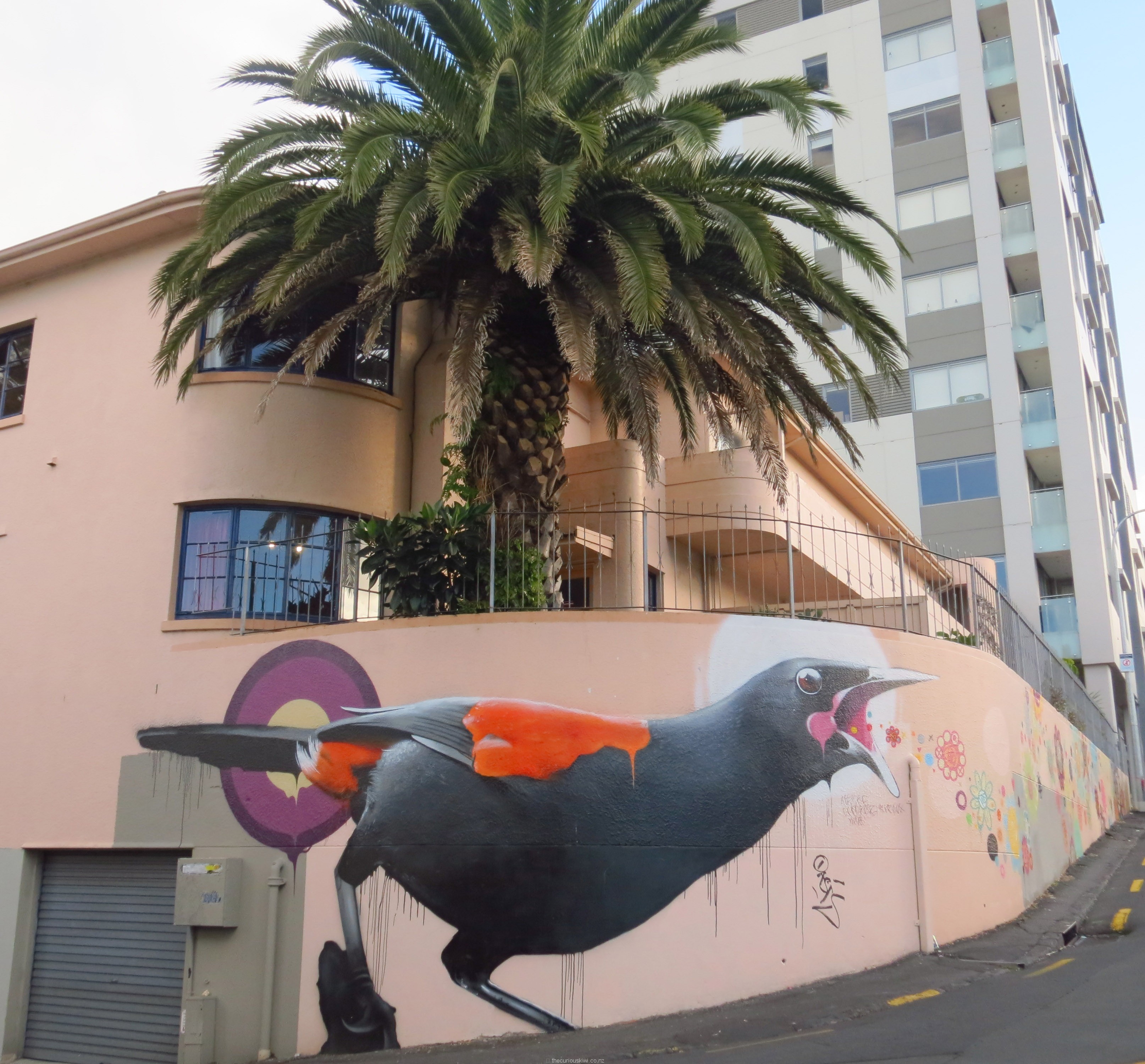 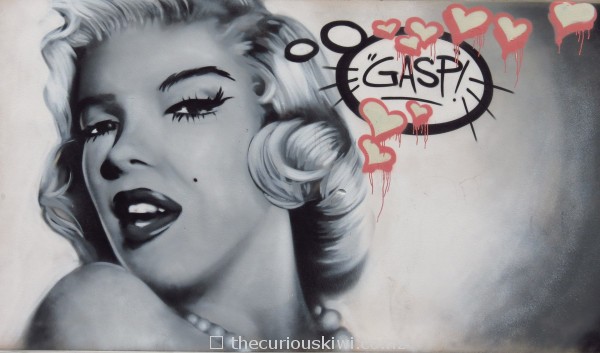 ‘Marilyn’ by Gasp, in Beresford Square 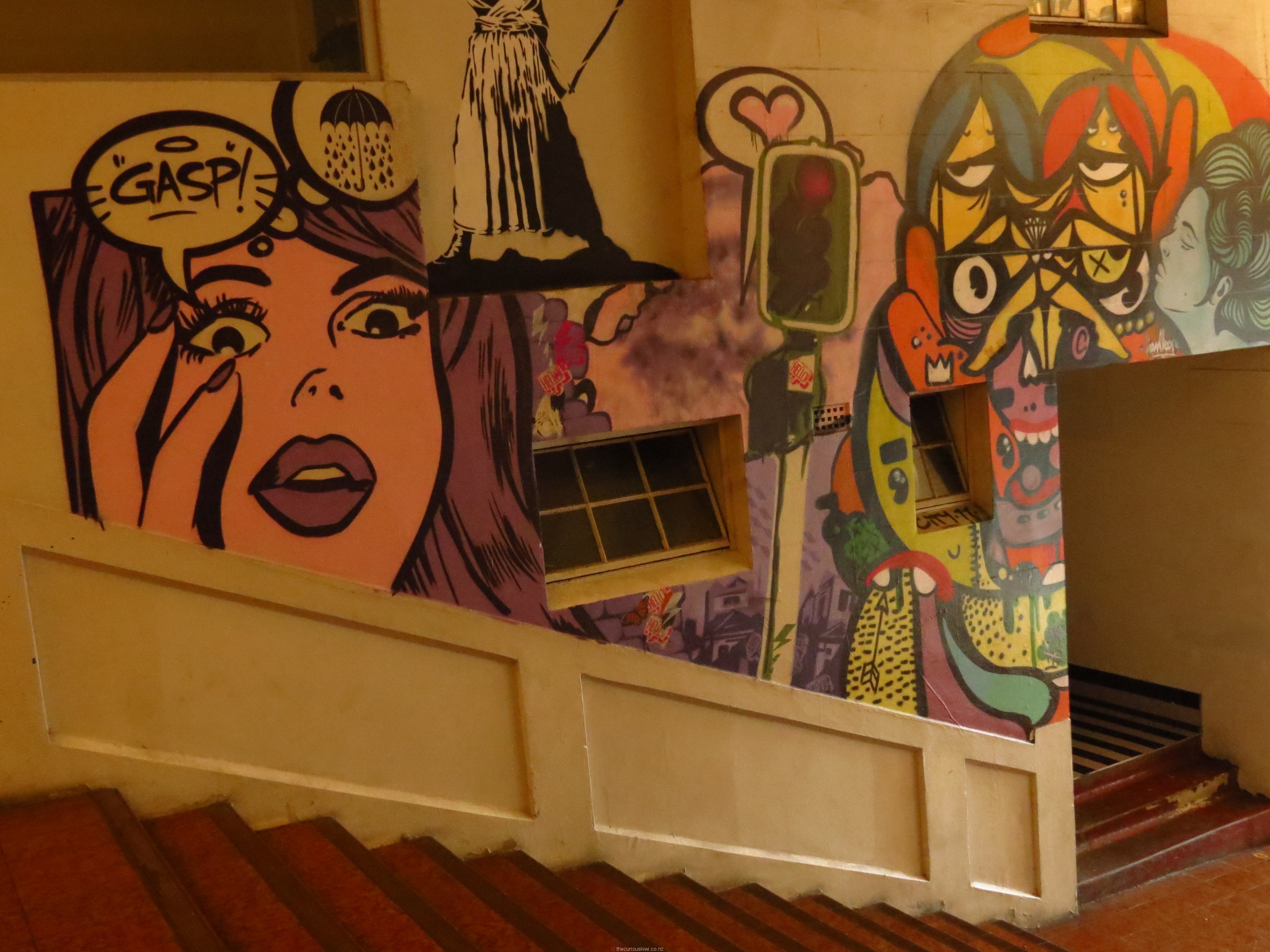 On the steps behind St Kevin’s Arcade on K Road 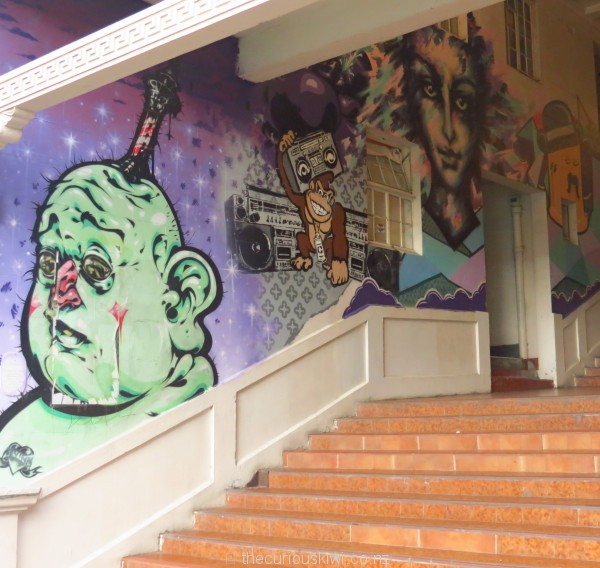 More art on the steps 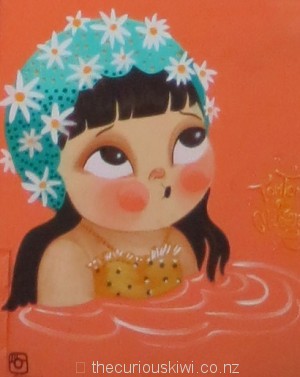 A small piece of the art work by Misery & Tom Tom, on Poynton Terrace – All Fresco 2014 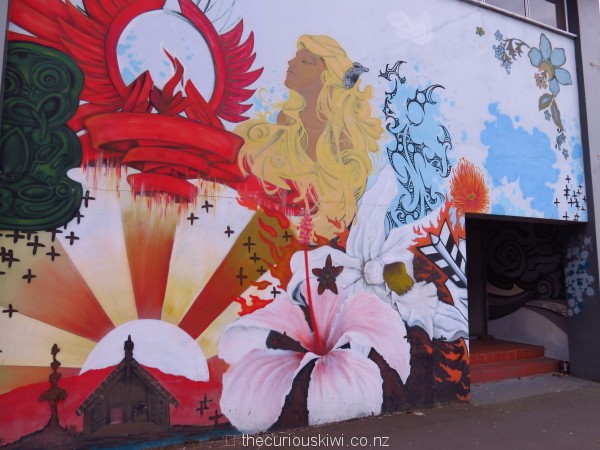 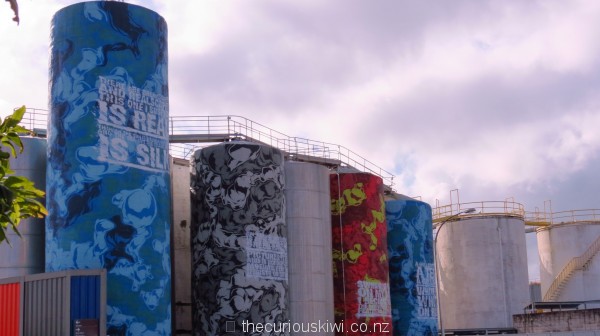 Silos in Wynyard Quarter – painted by Askew One, poems by CK Stead 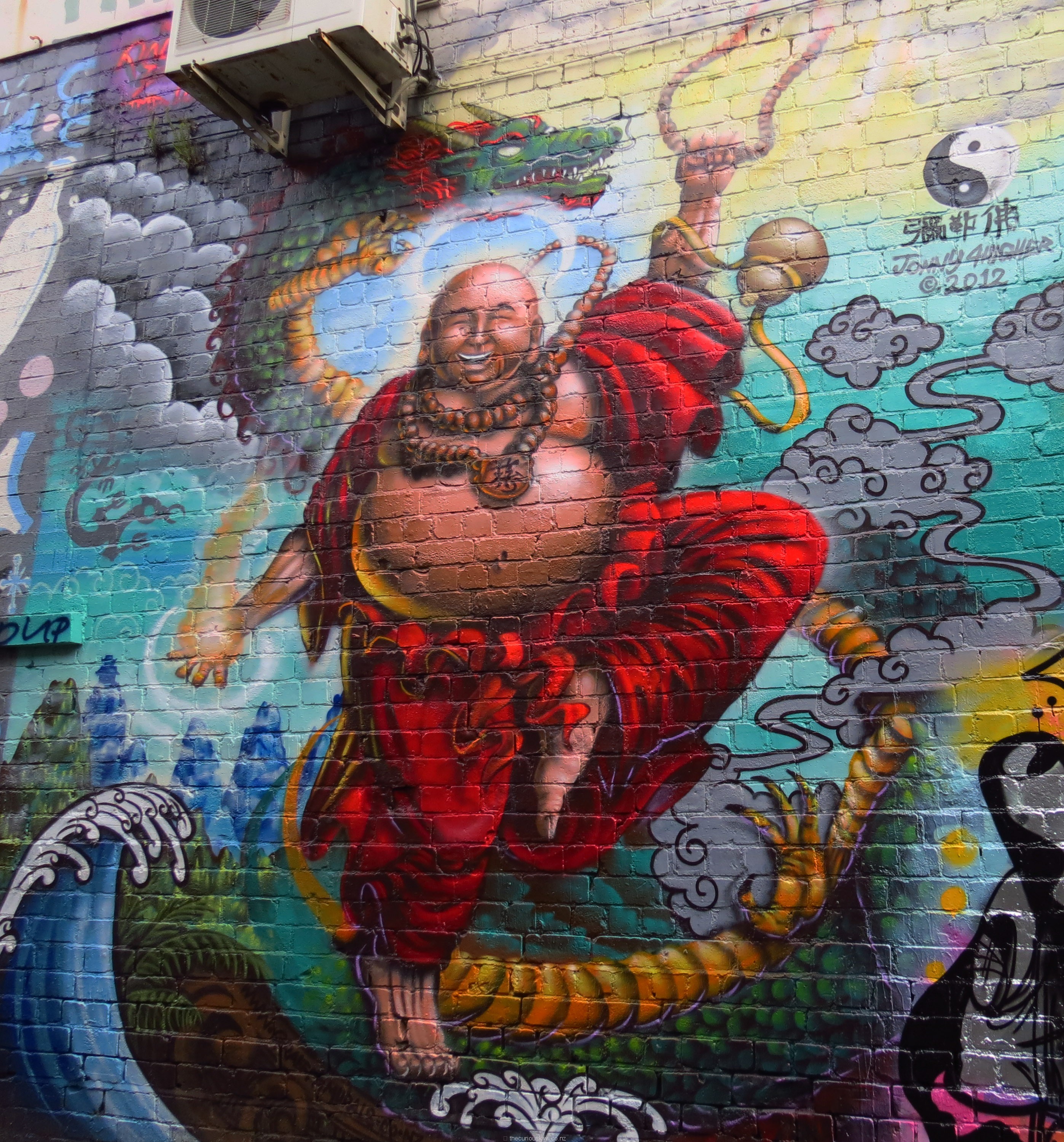 One of my favourites, has since been painted over, it’s gone but I’m still smiling – ‘The Laughing Buddha’ by Jonny4Higher

*For those not familiar with Auckland, K Road is short for Karangahape Road, you’ll find it at the top of Queen Street.